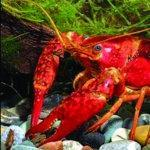 Red swamp crayfish are dark red in color with raised bright red spots covering the body and claws and a black wedge-shaped stripe on the top of the abdomen. They may vary in length between 2 to 5 inches. Occasionally, a genetic mutation may turn the body and/or claws blue, however all other features including the red raised spots remain the same.

A reproducing population of red swamp crayfish was reported in a 6-acre pond in Washington County in 2009. Prior to this discovery, the species had never been documented in Wisconsin. The red swamp crayfish is native along the Gulf Coast from northern Mexico to the Florida Panhandle and ranges upstream to southern Illinois along the Mississippi River drainage basin. This species is the most widely introduced crayfish in the world and is presently found on every continent except Australia and Antarctica. Red swamp crayfish are farmed extensively in the Southeastern United States and make up the vast majority of crayfish consumed worldwide. Biological supply companies commonly sell this species as pets or for educational purposes.

Red swamp crayfish prefer marshes, swamps, ponds and slow moving rivers and streams, but have also become established in lakes. They are well adapted to areas with large water level fluctuations. In their native range, red swamp crayfish mate in autumn and lay eggs in spring to early summer. The females burrow into soft sediment and lay eggs. The number of eggs varies with the size of the female, with large crayfish laying as many as 650 eggs at a time. They are tolerant of fluctuating water levels and can survive long dry spells by remaining in burrows or crawling over land to other water sources.

Red swamp crayfish are omnivorous, feeding on aquatic plants, snails, insects and fish and amphibian eggs and young. They have been found to reduce amphibian populations in California and Spain through direct predation and competition for habitat. Populations have also led to declines in native crayfish species in Europe through competition and because they often carry the crayfish fungus plague.

Red swamp crayfish are thought to be introduced most frequently by humans when crayfish used for culinary purposes, as bait, or as pets are released alive. Once established, local containment of red swamp crayfish may be difficult as males are known to disperse over land for up to several miles at night and during wet weather. It is illegal to possess both live crayfish and angling equipment simultaneously on any inland Wisconsin water (except the Mississippi River). It is also illegal to release crayfish into a water of the state without a permit. A fishing license is required to harvest or collect crayfish if you are age 16 or older.

To prevent the spread of invasive crayfish:

Never release any aquarium pets into the wild, and

Dispose of unwanted crayfish in the trash or contact the DNR for other disposal options.

Collecting and Verifying a Specimen

Your help is needed to detect new infestations early to prevent spread throughout the state. Please become familiar with this species and be on the lookout while in the field, particularly in the Menomonee River watershed.

If you suspect that you have found a specimen, please…

Collect up to 10 of the suspect crayfish. Place them directly into a container of 70-95% ethanol (rubbing alcohol will also work) and place vials in the freezer.

DO NOT MAIL ALCOHOL, IT IS ILLEGAL.