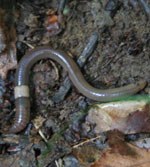 Crazy Worm, ( Amynthas agrestis ), is an invasive earthworm native to East Asia. This active and damaging pest was found in Wisconsin in 2013. It is known and sold under a variety of common names including crazy worms, Alabama jumpers and snake worms.

The name speaks for itself! They act crazy, jump and thrash when handled, and behave more like a threatened snake than a worm. Further, they may shed their tails when caught. Crazy worms can be 1.5 to 8 inches long.The narrow band around their body (clitellum) is milky white and smooth, unlike other species which have a raised clitellum. Crazy worms reproduce easily.They are asexual (parthenogenetic) and mature in just 60 days, so each year they can have two hatches.The best time to see them is late June and early July. From September until the first hard frost their population will double and may reach damaging levels.

We believe crazy worms are not yet wide-spread in Wisconsin, but they reproduce and spread quickly. So, it is extremely important for us to learn where they are and help slow the spread. Populations found in late 2013 at the UW Arboretum and elsewhere in Madison in early 2014 were
likely accidentally introduced.

Crazy worms have been found from Vermont to South Carolina.

They are a PROHIBITED species under
Wisconsin ’s Invasive Species
Rule NR 40.

The problem with CRAZY WORMS

Crazy worms change the soil, by disrupting the natural decomposition of leaf litter on the forest floor. They turn good soil into grainy, dry worm castings (poop) that cannot support the understory plants of our forests. Other plants, animals and fungi disappear because the understory community can no longer support them. Crazy worms in residential and urban areas can also cause harm to ornamental plantings and turf. More than others, crazy worms have a voracious appetite, speedy life cycle and a competitive edge. In fact, in areas with crazy worms there are no other species of earthworm.They can cause long term effects on the forests of Wisconsin which are already under pressure from other invasive insects, plants, pathogens and diseases.

It is illegal to possess, transport, transfer, or introduce CRAZY WORMS in Wisconsin