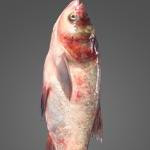 DESCRIPTION: Bighead and silver carp are invasive fish moving toward Wisconsin waters from the Illinois River and the Mississippi River at a rate of about 50 miles a year. The term “Asian Carp” is sometimes used to describe these two invasive species, along with the black and grass carp (neither of which are currently considered to pose an imminent threat to Wisconsin waters). Bighead and silver carp were brought to North America from China in the early 1970s to improve water quality by removing algae from aquaculture ponds, and possibly to be marketed as a food fish. Both species have low-set eyes and large upturned mouths without barbels. Their heads have no scales, and their body scales are very small. The bighead carp has dark blotches along the top of its body (in the dorsal region).

DISTRIBUTION AND HABITAT: Bighead and silver carp are spreading to lakes, rivers and streams in several areas of North America, particularly the Mississippi River and Great Lakes region. Their populations have been doubling annually, with the fastest expansions occurring in the Missouri and Illinois Rivers. They live in temperate freshwater in both their native and introduced habitats, requiring bodies of water with some current for eggs to float and develop properly. They are well-suited to the climate of the Great Lakes region, which is similar to that in their native Asian habitats, and particularly favor large rivers and connecting lakes.

LIFE HISTORY AND EFFECTS OF INVASION: Asian carp migrate up streams or rivers to breed; eggs and larvae float downstream to floodplain zones. These fish are fast growing and become very large: They can weigh up to 100 pounds, and can grow to a length of more than four feet. Asian carp also reproduce prolifically. Bighead carp females produce between 200,000 to 1 million eggs in their lifetime, while silver carp females produce between 300 to 5,000 eggs.

Bighead and silver carp are filter feeders, straining tiny animals and plants (plankton) out of the water. Some may eat their weight in plankton daily. In eating plankton, these fish directly compete with native filter feeders such as mussels and fish. This competition for food can potentially disrupt the entire food web in a water body. Some scientists fear that, if introduced, they could become a dominant species in the Great Lakes.

Silver carp (and bighead carp to a lesser extent) are renowned for leaping high out of the water when disturbed by watercraft. Boaters traveling at high speeds can actually be injured by these leaping fish. (Imagine hitting a 100-pound, four-foot-long fish at 30 miles per hour!). They also diminish the opportunities of fisherman as native fishes decline from carp competition.

CONTROLLING ASIAN CARP: The only thing that is keeping these fish from moving into Lake Michigan is an electrical barrier system on the Chicago Sanitary and Ship Canal, though this is not a fail-safe system. Although the barrier acts to repel the fish, it doesn’t actually kill them. Also, flooding on the Des Plaines River could carry water (and carp) overland into the Canal upstream of the barrier. The construction of similar barriers at two points along the Mississippi has been recommended, though this system will need to be more technologically advanced and thus will be more expensive. This is because the design must allow the free flow of native fish up and downstream for spawning while simultaneously blocking movement of the Asian carp upstream.
University of Minnesota researchers are evaluating the possible release of sterile or genetically modified fish, as well as the use of pheromones or other sensory cues, to reduce the numbers of Asian carp in the wild.
Early detection of isolated populations may help slow or restrict the spread of these Asian carp. To report a sighting, note exact location. Freeze specimen in a sealed plastic bag and call your local DNR Service Center.