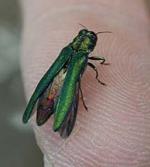 The emerald ash borer (Agrilus planipennis), an invasive, wood-boring beetle that attacks ash trees, was positively identified for the first time in Wisconsin in Ozaukee and Washington Counties in August 2008. Since then, a second infestation has been identified in Vernon County in April 2009.  This exotic insect, native to Asia, was first detected in North American in Detroit, Michigan in 2002.  Since this initial detection, the emerald ash borer has killed tens of millions of ash trees (Fraxinus spp.) in the Great Lakes region and beyond. 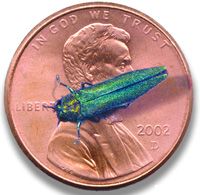 The emerald ash borer belongs to a group of insects known as metallic wood-boring beetles (Buprestidae). The beetle's immature or larval form spends its life feeding beneath the bark of ash trees. As a result, the ash tree host suffers extensive damage to its vascular system, depriving the tree's crown of water and nutrients. Research conducted by Michigan State University and the USDA Forest Service has shown the emerald ash borer attacks both stressed and healthy ash trees, typically killing its host in three to five years. All ash species in Wisconsin are attacked, including white, green black and blue ash. Mountain ash (Sorbus spp.), not a true ash, is unaffected.