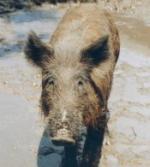 Feral pigs are mid-sized hoofed mammals with a long, pointed head and stocky build. Males and females look much alike. Wild hogs exhibit great variation in color and size. The average wild sow weighs about 110 pounds (ranging from 80 to 330 pounds) and the average wild boar weighs about 130 pounds (ranging from 100 to 440 pounds). Unusually large, trophy-sized feral pigs have been taken that reach three feet tall, six feet long and over 500 pounds. Their hair is coarse with long bristles (coarser, denser and longer than that of a domestic pig). Colors and patterns range from solid black, gray, brown, blonde, white, or red to spotted and belted combinations of these same colors. Most generally, however, the animals are black. An adult develops a thick, scruffy mane with stiff bristles.

Feral pigs have elongated, flexible, tough, flattened snouts. Their pointed ears stand erect, about four to five inches above their head, though sometimes they flop outward. Their moderately long tails are sparsely haired, straight and never coiled like the tail of a domestic pig. They have four cloven feet, similar in appearance to a deer's hooves. Boars have four continually growing tusks that can be extremely sharp. The upper tusks are often 3 to 5 inches long, but have sometimes been recorded at 9 inches in length. These upper canines curl up and out along the sides of the mouth. The lower canines also turn out and curve back toward the eyes. Usually the tusks are broken or worn from use. The boars use their tusks for defense and to establish a dominance hierarchy during breeding. Due to the injuries inflicted by these tusks, boars have also developed a thick, tough skin of cartilage and scar tissue around their shoulders.

The home territory of a feral pig covers an area about 10 square miles or less. However, if food is in short supply, the pigs may range up to 50 square miles. They nest and rest in dense vegetation and secluded thickets. Their nests and beds are small, grass-lined hollows made of piles of grass and twigs.

Feral pigs have a very strong sense of smell. They use tough, flexible nose to sniff out roots, tubers, and small animals living underground. Pigs also have a good sense of hearing, but a poor sense of eyesight. Feral pigs communicate with each other by grunting and squealing, similar to their domestic relatives.

These hoofed mammals can run up to 30 miles per hour and are good swimmers.

Boars usually lead solitary lives, though several may band together. Sows forage with their young, usually about six in a family group. Several family groups may join together to live in a sounder (the proper term for a large group of pigs) of 50 or more individuals.

Feral pigs can mate any time of the year. If a sow is not bred during the two or three days she is in estrus, she will become sexually receptive again 21 days later. Generally pigs mate during two peak breeding seasons: one in winter (December through February) and another in early summer. Boars travel between family groups in search of receptive sows. The dominant male mates first. The less dominant males may mate after the dominant boar is finished breeding.

Sexual maturity and reproductive ability of feral pigs greatly depend upon nutrition and habitat. Under optimal conditions, sows can begin breeding at 6 months of age, and produce up to 4 litters per year with each litter consisting of 4 to 12 piglets. In northern portions of their range, biologists report that reproductively active sows generally only produce 2 litters per year consisting of 4-8 piglets.

After about a 115 day gestation period, sows give birth to piglets that weigh from one to two pounds at birth. Juveniles have pale stripes running the length of their body until they are six weeks old. After one week of suckling, the piglets are able to follow their mother around. The young grow rapidly and are weaned in about three months. The offspring disperse after a year with their mother and are usually sexually mature by a year and a half. The young reach adult stature within three years and are fully-grown in five to six years.

Unlike some other hoofed animals, the feral pig has a simple stomach and does not chew cud. Feral pigs are opportunistic omnivores that eat whatever plants or animals happen their way. They especially relish acorns as well as hickory and beech nuts in the autumn. At other times of the year they eat forbs, grasses, leaves, berries and other fruits, roots and tubers, corn and other agricultural crops, insects, crayfish, frogs, salamanders, snakes, mice, eggs of ground-nesting birds, young rabbits, fawns and young livestock, such as lambs, calves, kids. They can also kill larger livestock that are weak from illness or injury. When fresh meat is not available, feral pigs will also readily scavenge carrion.

Pigs feed most heavily at dawn and dusk, spending the majority of the day either wallowing in mud holes or resting in dense vegetation.

Domestic pigs were introduced from Europe to the Americas by Spanish explorers. Over time, some pigs escaped or were intentionally released into the wild. Subsequently, free-ranging, feral populations established themselves on American soil.

Today, feral pigs and hybrids of the Russian wild boars are found in 23 states with the possibility of yet-undiscovered populations in several more states. The largest populations are in the coastal states surrounding the Gulf of Mexico and California.

In locations where feral pigs have more recently been discovered it is likely that these individuals are the result of unintentional escapes from domestic swine facilities, escapes or releases from game farms, or illegal stocking. Biologists estimate the nationwide population of feral pigs to be around four million animals.

In general, feral pigs can adapt to almost any kind of habitat. However, in other states, they tend to inhabit swamps, brushlands, woodlands, mountain forests and woodlands near agricultural fields.

Feral pigs can transmit diseases and parasites to livestock and people. Farmers are especially worried about the potential spread of exotic diseases to their domestic livestock. Of primary concern are diseases such as pseudorabies, brucellosis and tuberculosis. Many farmers are also troubled by potential crop losses. As mentioned above, feral pigs can be extremely destructive to recently planted fields and can damage pastures, facilities and fences, resulting in serious financial losses. Wallows can affect ponds and wetlands by muddying the water, creating algae blooms, destroying aquatic vegetation and lowering overall water quality. Digging and rooting activity of feral pigs near a watercourse leads to bank erosion. All of this activity can lead to decreased livestock use and poor fish production.

Due to feral pigs' tramping and rooting behaviors, Wisconsin's and other state's wildlife biologists are becoming increasingly concerned about the devastation these exotic animals can cause to ecologically sensitive native habitats, particularly native plants and rare, threatened or endangered species. These biologists are beginning to document the population declines that feral pigs are inflicting on grassland birds, wetland wildlife, and various small mammals.