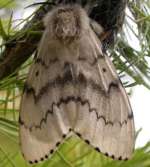 Gypsy moth continues to spread through Wisconsin. Populations of the moth and its destructive caterpillar can explode in early summer every five to 15 years and have defoliated large forest tracts in the northeastern states and Michigan. We can expect similar outbreaks in Wisconsin: Our forests are full of the gypsy moth's favorite trees, and the climate here is similar to that in infested areas. However, there are many steps communities and forest managers can take to delay outbreaks and minimize the damage.

To slow the spread of gypsy moth, the Department of Natural Resources, Department of Agriculture, Trade and Consumer Protection, the University of Wisconsin, the USDA Forest Service, and the Animal and Plant Health Inspection Service have cooperatively monitored Wisconsin's forests to trap adults and search for egg masses. We've attacked pioneering colonies to delay the moth's spread. Unfortunately, the moth is constantly introduced from traveling vehicles, imported vegetation, in wood products and other sources, and is naturally spreading west. First found in widespread areas of Wisconsin in 1988, gypsy moth has now established a foothold in counties along the Lake Michigan shoreline.

Once it's established, we can't eradicate the moth, but we have several strategies to reduce the damage it does. Management tactics include biological controls to slow the population growth, silvicultural controls (changes in tree planting and harvesting) to make the forest less hospitable and limit damage from outbreaks, removing egg masses, killing caterpillars, and using insecticides to protect especially valuable woodlands and scenic plots like campgrounds.

Gypsy moth is a European and Asian native with few natural predators in North America. Researchers sample moth populations to find parasites and diseases that could slow the population growth and reduce the frequency of outbreaks without changing native plant and animal communities. In the northeastern states and Michigan, nine species of parasites and two diseases have been isolated that afflict gypsy moth at various stages of growth.

In Wisconsin, our research team collected and reared gypsy moth caterpillars in labs to find any causes of premature death. We also collected egg masses and examined them for parasites or other natural enemies.

We were excited to find a variety of gypsy moth enemies. A miniature parasitic wasp, Ooencyrtus kuvanae, about the size of a gnat, is already established in four counties at the base of the Door peninsula. This wasp parasitizes gypsy moth eggs, typically killing about 20 percent of the egg mass. Four generations of this wasp can grow each year on a single egg mass. A second parasitic wasp, Cotesia melanoscela, has attacked gypsy moth caterpillars in southern Oconto County.

Two diseases specific to the moth also were found in Wisconsin. Nucleopolyhedrosis virus (NPV) attacks caterpillars under stress. And the fungal disease Entomorphaga maimaiga, was found near the base of Door County – exciting news, because this fungus has decimated gypsy moth populations elsewhere in the United States.

The only non-native natural enemy of the gypsy moth we found in the counties sampled has been a parasitic fly, Compsilura concinnata. The fly was first introduced in New England in 1911. Since it lives on a huge range of caterpillar species, it spread rapidly throughout North America. We would not consider introducing this fly as it also parasitizes a variety of our native caterpillars.

Following the survey work, we've elected to introduce E. maimaiga, O. kuvanae and C. melanoscela because they are hardy in the tough Wisconsin climate, will selectively attack gypsy moth, and can survive in the environment even if the gypsy moth population is sparse.  Research shows these species rarely affect other insects and does not appear to affect other animals or people in any way.

These natural moth enemies were released in places with habitat to match their needs. For instance, the fungal disease is only effective where there is a layer of woody debris and leaf litter around trees.

The fungal spores overwinter in the soil and infect caterpillars crawling across the spores – we know that gypsy moth caterpillars crawl out of the trees every day once they are half-grown to avoid being eaten by birds. The caterpillars hide in the woody debris and under leaves that could hold the deadly fungal spores. We released this fungus at 20 sites in northeastern and southeastern Wisconsin.

The wasp O. kuvanae was released at eight sites; C. melanoscela has been released at three sites in northeastern Wisconsin. Parasitic wasps will be released at fewer sites since it's more difficult to collect and rear wasps than to collect millions of fungal spores.

In coming years, we will monitor the release sites, and introduce more of these predators into gypsy moth infestations.

The selection and spacing of trees can reduce how fast gypsy moth populations increase and decrease tree mortality if outbreaks occur. Standard practices for good forestry need only be modified a bit to make woodlands less hospitable to this pest.

The types of trees you choose can also determine how many will die following disease outbreaks. Gypsy moth defoliates trees, and those trees that succumb are usually in poor condition before the moth strikes. Woodlots need to be thinned or stocked at proper densities. Crowded trees may not survive one defoliation; trees spaced too far apart have more lower branches that give gypsy moth many places to hide from predators. Trees grown at the proper density have long, straight trunks where predators can easily find the moth. Healthy trees also have greater reserves to survive the wave of fungal diseases and insects that often rage through forests following a major gypsy moth invasion.

The variety of trees in a woodlot can also slow an outbreak. While gypsy moth can feed on many tree types, the caterpillar favors oak, aspen, birch, basswood, tamarack and apple. Gypsy moth avoids green, white and black ash, cedar, locust, balsam fir and scotch pine. Maple, pine, nut trees, beech, spruce and hemlock are less palatable to gypsy moth caterpillars as well. Increasing the proportions of species the caterpillars avoid or dislike can slow the population growth and delay outbreaks. For tips on silvicultural options to reduce damage from gypsy moth, send for Forestry Facts pamphlet # 83 , "Forest Management Strategies to Minimize the Impact of Gypsy Moth" from the UW-Cooperative Extension office near you. Check your phone book under county government listings for the address.

Mechanical controls require scouting, finding and destroying egg masses and caterpillars. The technique will work in a small area in the city or on a suburban lot, but would not be practical in a woodlot or forest. Most people wait to put up the barriers described here until the pest is commonly seen.

Your best bet is destroying egg masses, each of which could hatch into 500-1,000 caterpillars come spring. Gypsy moth egg masses are about 1 ½ inches long, shaped like a teardrop, and look like they are made of buff-tan felt. Egg masses typically are laid on rough bark at the base of a tree, in holes, cracks or broken limbs, and under loose bark. You'll need to scout around, as egg masses also can be laid on any outdoor object with a crevice where moths can hide – wood piles, undersides of vehicles, trailers or campers, outdoor furniture, decks, playground equipment, signs attached to trees and permanent trash heaps like junked cars and tire piles.

Search for egg masses from fall (after the leaves have fallen) through early spring when the masses are easier to find. Any masses you find from early May through early August are likely to be empty – the caterpillars have hatched. Always wear gloves when collecting egg masses; the skin is often irritated by the fine hairs covering the egg sacs. If you find egg masses, scrape them into a sealed plastic bag. Don't just drop them on the ground, because the masses will still hatch. Kill egg masses by cooking in a microwave for two minutes or coating with an equal mixture of vegetable oil and water. Then dispose of the treated egg masses in the trash.

Reduce the number of gypsy moth caterpillars in your trees by putting up barrier bands before the caterpillars start to hatch in mid-May. Caterpillars crawling up the trees will mire down in the sticky material and die. Bands can keep caterpillars from migrating to other trees or from climbing back up if they fall off the tree (surprisingly common!).

Make barrier bands using duct tape and a waterproof, sticky material such as the tree goo Tanglefoot or even petroleum jelly. When the bark is dry, wrap duct tape around the tree, shiny side out, pressing the tape firmly into the bark cracks to prevent caterpillars from slipping under the bands. The tape should be wrapped a few inches wide and placed around the tree trunk at chest height – about four feet above the ground.

A band of duct tape is needed to protect the tree bark from the sticky material, which could disfigure or kill the tree if applied directly. Smear the sticky material along the center of the band. (If you choose to use petroleum jelly, allow at least two inches of uncoated band under the jelly as it can melt and flow downward.) Periodically check the barrier bands to make sure they have not been clogged with insects, dirt or debris. Apply more sticky material as needed; check especially after a rain. You can take the barrier bands down in late July after the gypsy moth caterpillars have pupated.

You have a third chance to kill gypsy moth if you put up and tend burlap bands. After the caterpillars get about an inch long in mid-June, they will move down the trunk to hide from predators during the day. The caterpillars will hide under the burlap and you can collect and kill large numbers of them.

To make a band, cut a strip of burlap 12-18 inches wide and long enough to reach around the tree and overlap a few inches. Tie a string around the center of the band and allow the top six inches to flop over to make a two-layered skirt. Tie the band around the tree above the sticky band (if you have one in place). Check the bands every day from early afternoon until about 6 p.m. Use rubber gloves or forceps to collect all caterpillars, pupae, adults and egg masses. Kill the caterpillars, adults and pupae by placing them in a cup of soapy water. Once the insects are dead, drain off the water and throw the insects in the trash. Take the burlap bands down in August.

Spraying is a last resort

Gypsy moth can be killed by certain insecticides if their populations are very high and they threaten to severely damage very valuable trees. We expect it will be several years before populations are high enough in Wisconsin to warrant such treatment given that most insecticides kill more species than just gypsy moths.

Spraying will not eliminate gypsy moth from an area, but it can be an effective means of reducing the level of defoliation to a tolerable level and protecting scenic campgrounds, scattered residential trees and stands of veneer-quality hardwoods. It's difficult to justify spraying other areas.

Unfortunately, the gypsy moth is here to stay. But Wisconsin is lucky. We've had time to learn how to handle gypsy moth from the experiences of other states. We'll certainly lose leaves and trees, but with continuing research, constant vigilance, and a citizenry prepared to battle the moth on the home front, we can minimize the ravages the moth has caused elsewhere.