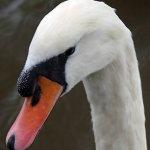 The mute swan is a non-native species and their population is growing at a rapid rate. In other states where the population has been growing longer than in Wisconsin, significant problems have developed. Concerns exist because mute and trumpeter swans may select similar breeding and feeding sites. The presence of mute swans in the wild has the potential to interfere with the restoration of the native trumpeter swan. Mute swans also compete for resources with other waterfowl such as loons, ducks, colonial waterbirds, tundra swans, and geese and will sometimes completely displace, or even kill, native waterfowl. While trumpeter swans may also compete with other waterfowl, this is a natural occurrence because it is between native species.

Due to the tendency of mute swans to concentrate in large numbers at productive feeding areas, there is concern that they deplete aquatic plants needed by native waterfowl. In flocks, mute swans can overgraze submerged vegetation to the point that this vegetation cannot fully recover (see figure). This causes a reduction in the quantity and quality of aquatic habitat that may affect the food web, impact resident and migratory waterfowl, and affect an area’s biodiversity. While feeding, mute swans paddle their feet and rake the substrate. This behavior causes sediments to become suspended in the water column, which may reduce water quality.

Mute swan studies in the Chesapeake Bay provide evidence of vegetation degradation by experimentation with exclosures. Exclosures kept the nearby mute swans from feeding on the vegetation inside.

Adult mute swans may become dangerously aggressive toward people and pets, especially in areas where they have become accustomed to food handouts. There are numerous cases where mute swans have threatened and attacked people in parks, backyards, and small boats. Although this often involves some degree of bluffing, mute swans are capable of inflicting bruises, sprains, and bone fractures and, on at least two occasions on the East Coast, human fatalities have occurred. Aggressive tendencies vary widely between individual swans but are most pronounced in territorial breeding males.