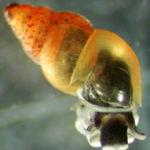 Other names for this animal

The New Zealand mudsnail is a small, operculate (trapdoor) snail that gives birth to live young. It is a primary consumer that grazes on algae and is native New Zealand. The New Zealand mudsnail has a wide range of environmental tolerances and has been found in nearly every freshwater habitat in New Zealand. In their native habitat they are known to reproduce sexually; however, they can reproduce asexually and all introduced populations are clonal. This means that only one snail is needed to start a new population.

Effects at the the Black Earth Creek fishery

It is unknown how the mudsnail will affect the Black Earth Creek fishery as this is the first inland invasion not only in Wisconsin, but in the Midwest. Research from other invasion sites, however, suggests that Wisconsin streams could realize negative impacts. The New Zealand mudsnails will likely compete directly with many native grazers and could reduce the abundance of this important food source. Research from the western U.S. also suggests that some fish (brown trout and sculpin) avoid mudsnails while some fish (mountain whitefish) will readily eat them. However, energetic studies show that New Zealand mudsnails can pass through fish stomachs undigested and therefore may offer little to no energy when compared to other common food items. New Zealand mudsnails do have predators in their native range, but there is no evidence that predators do or could control populations.

Due to its small size, the New Zealand mudsnail can easily hitchhike on a variety of recreational and commercial equipment that comes in contact with the water and riparian zone. Its operculum allows it to survive in undesirable environments for extended periods of time. Initial invasion pathways to the United States are thought to have been through ballast water or in the water of live game fish shipped from infested waters. Many other pathways may contribute to the secondary spread of New Zealand mudsnails. These pathways include but are not limited to waders and other fishing gear, watercraft, commercial construction equipment and fish stocking equipment.