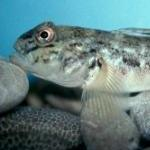 The round goby, Neogobius melanostomus, is a bottom dwelling fish with a large head, resembling a tadpole, which can grow to be 250 mm (10 inches). First discovered in Lake St. Clair in 1990, presumably introduced via ballast water from transoceanic vessels, the round goby and the tubenose goby have spread to lakes Erie, Michigan and Superior and to many rivers including the Mississippi watershed. Round gobies are thriving in the Great Lakes Basin because they are aggressive, voracious feeders which can forage in total darkness. The round goby takes over prime spawning sites traditionally used by native species, competing with native fish for habitat and changing the balance of the ecosystem.