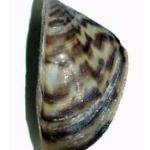 DESCRIPTION:The zebra mussel (Dreissena polymorpha) is a tiny (1/8-inch to 2-inch) bottom-dwelling clam native to Europe and Asia. Zebra mussels were introduced into the Great Lakes in 1985 or 1986, and have been spreading throughout them since that time. They were most likely brought to North America as larvae in ballast water of ships that traveled from fresh-water Eurasian ports to the Great Lakes. Zebra mussels look like small clams with a yellowish or brownish D-shaped shell, usually with alternating dark- and light-colored stripes. They can be up to two inches long, but most are under an inch. Zebra mussels usually grow in clusters containing numerous individuals. 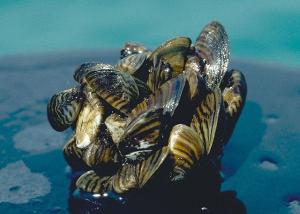 DISTRIBUTION AND HABITAT: Zebra mussels were first found in Wisconsin waters of Lake Michigan in 1990. They are now found in a number of inland Wisconsin waters (see current infestation list and maps). By 1991, the mussels had made their way into Pool 8 of the Mississippi River, most likely originating in the Illinois River (currents may have carried them to the confluence with the Mississippi, from which barges could carry them upriver). Populations of zebra mussels are steadily increasing to over several thousand per square meter in some portions of the Mississippi river. As of 2003, their distribution included the entire Wisconsin portion of the Mississippi and extended up to Stillwater in the St Croix River.

Zebra mussels are the only freshwater mollusks that can firmly attach themselves to solid objects. They are generally found in shallow (6-30 feet deep), algae-rich water.

LIFE HISTORY AND EFFECTS OF INVASION: Zebra mussels usually reach reproductive maturity by the end of their first year. Reproduction occurs through spawning when sperm and eggs are released into the water. Spawning peaks at water temperatures of about 68 degrees F. A fertilized egg results in a free-swimming, planktonic larva called a ‘veliger.’ This veliger remains suspended in the water column for one to five weeks, and then begins to sink, eventually attaching to a stable surface (e.g., rocks, dock pilings, aquatic weeds, water intakes, boat hulls) on which to live, grow and reproduce. They attach to these surfaces using adhesive structures called byssal threads.

Zebra mussels feed by drawing water into their bodies and filtering out most of the suspended microscopic plants, animals and debris for food. This process can lead to increased water clarity and a depleted food supply for other aquatic organisms, including fish. The higher light penetration fosters growth of rooted aquatic plants which, although creating more habitat for small fish, may inhibit the larger, predatory fish from finding their food. This thicker plant growth can also interfere with boaters, anglers and swimmers. Zebra mussel infestations may also promote the growth of blue-green algae, since they avoid consuming this type of algae but not others. 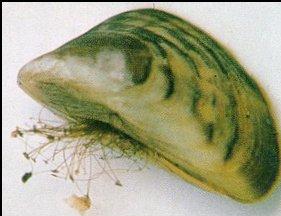 Zebra mussels attach to the shells of native mussels in great masses, effectively smothering them. A survey by the Corps in the East Channel of the Mississippi River at Prairie du Chien revealed a substantial reduction in the diversity and density of native mussels due to Zebra Mussel infestations. The East Channel provides habitat for one of the best mussel beds in the Upper Mississippi River. Future efforts are being considered to relocate such native mussel beds to waters that are less likely to be impacted by zebra mussels.

Financial impacts have been significant to Wisconsin's water utilities and to power plants, where these animals congregate on and clog intake and distribution pipes. In 2001, for example, Wisconsin Electric Power Company reported that they were spending $1.2 million per year in the control of zebra mussels on their Lake Michigan power plants. Lock and dam operators on the Mississippi River and raw water users have also incurred costs. The estimated annual cost of controlling zebra mussels in the Great Lakes now range from $100 to $400 million, according to NOAA Great Lakes Environmental Research Laboratory Director Dr. Stephen Brandt.

CONTROLLING ZEBRA MUSSELS: Once zebra mussels are established in a water body, very little can be done to control them. It is therefore crucial to take all possible measures to prevent their introduction in the first place. Be sure to follow the four-step procedure in preventing the spread of aquatic hitchhikers. In addition to these measures, boaters can take specific precautions in protecting their motors from zebra mussels.

Infestation of raw water intake pipes and structures can seriously limit water flow into hatcheries, drinking water treatment plants, industrial facilities, and cooling systems of power plants. Virtually all control initiatives have stemmed from such utility or industrial infestations, thus cost-effectiveness and mechanical functioning are the primary goals. Control measures can include physical removal, industrial vacuums, backflushing, chemical applications (chlorine, bromine, potassium permanganate), and even oxygen deprivation. An ozonation process is under investigation (patented by Bollyky Associates Inc.) which involves the pumping of high concentrations of dissolved ozone into the intake of raw water pipes. This method only works in controlling veligers, and supposedly has little negative impacts on the ecosystem. Further research on effective industrial control measures that minimize negative impacts on ecosystem health is needed.

No selective method has been developed that succeeds in controlling zebra mussels in the wild without also harming other aquatic organisms. To a certain extent, ducks and fish will eat small zebra mussels, but not to the point of effectively controlling their populations. Water draw-downs may yield positive results in some situations, as the mussels are killed by deep freezing during winter. They are also susceptible to the scouring and freezing of winter ice along the shores of the Great Lakes. As of yet, no practical and effective controls are known, again emphasizing the need for research and prevention.