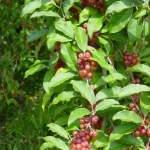 Description: Autumn olive is a deciduous shrub or small tree in the Oleaster family (Elaeagnaceae) that grows to approximately 20 feet in height. Leaves are dark green, alternate, oval to lanceolate, and untoothed. The underside is covered with silver-white scales. The small, light yellow flowers are borne along twigs after the leaves have appeared early in the growing season. The small, round, juicy fruits are reddish to pink, dotted with scales, and produced in great quantity. Birds forage on its fruits and contribute to seed dispersal.

Autumn olive is easily confused with a closely related species, Russian olive, which is also an invasive species. Russian olive has elliptic to lanceolate leaves, its branches are usually thorny, and its fruit is yellow, dry and 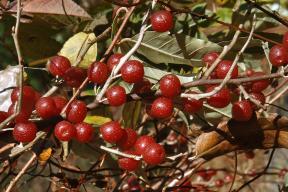 Habitat: It grows well in a variety of soils including sandy, loamy, and somewhat clayey textures with a pH range of 4.8-6.5. It has nitrogen-fixing root nodules which allow it to thrive in poor soils. Mature trees tolerate light shade, but produce more fruits in full sun, and seedlings may be shade intolerant. It does not do well on wet sites or in densely forested areas. It is drought tolerant and may invade grasslands and sparse woodlands. Typical habitats are disturbed areas, roadsides, pastures and fields.

Ecological Impacts: Autumn olive has the potential of becoming one of the most troublesome shrubs in the central and eastern United States. It exhibits prolific fruiting and rapid growth that suppresses native plants. It is widely disseminated by birds and can easily adapt to many sites.  Due to its nitrogen-fixing capabilities, it has the capacity to adversely affect the nitrogen cycle of native communities that may depend on infertile soils.

Control and Management:  • Manual- Seedlings and sprouts can be hand-pulled when the soil is moist to insure removal of the root system. Note: On larger plants, cutting alone results in thicker, denser growth. Burning during the dormant season also results in vigorous re-sprouting.   • Chemical- It can be effectively controlled using any of several readily available general use herbicides such as glyphosate. Foliar application has proven effective in controlling these species. Since glyphosate is a nonselective herbicide it will affect all green vegetation with which it comes into contact. Care should be taken to avoid impacting native plant species. Glyphosate herbicides are recommended because they are biodegradable. Follow label and state requirements.