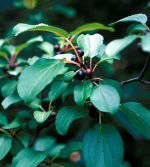 Both common and glossy buckthorns are tall shrubs or small trees reaching 20-25 feet in height and 10 inches in diameter. Most often they grow in a large shrub growth form, having a few to several stems from the base. The shrubs have spreading, loosely-branched crowns. Their bark is gray to brown with prominent, often elongate, lighter-colored lenticels. The buckthorns share a very distinctive winter appearance having naked, hairy terminal buds and gracefully curving, or arched, twigs with closely-spaced, prominent leaf scars that give the twigs a warty or bumpy silhouette. Cutting a branch of either species exposes a yellow sapwood and a pinkish to orange heartwood. Both species of buckthorn are distinctive enough from other native species to be identified at all times of the year once their characteristics have been learned. 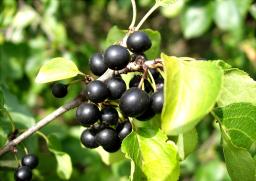 The dioecious common buckthorn may be somewhat easier to spot when the female plants are in fruit. The columnar variety of glossy buckthorn has a very narrow upright form and is commonly used for wind or visual screening. Common buckthorn has dull green, ovate-elliptic leaves which are smooth on both surfaces and have minute teeth on the margins. They vary from rounded to pointed on the tip. Twigs of common buckthorn often end in thorns. Glossy buckthorn has thin, glossy, ovate or elliptic leaves. The upper leaf surface is shiny; the lower surface can be hairy or smooth and their margins are entire (not toothed). There are several ornamental cultivars of Rhamnus frangula including "columnaris" and "asplenifolia." It is believe that the seeds from these plants can disperse and produce weedy plants. 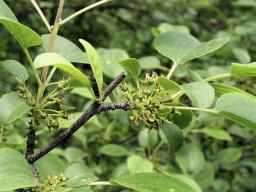 Common buckthorn and glossy buckthorn are two closely related species originating in Eurasia and were introduced to North America as ornamentals. They were planted in hedgerows in Wisconsin as early as 1849. They have become naturalized from Nova Scotia to Saskatchewan, south to Missouri, and east to New England. They are well established and rapidly spreading in Wisconsin. Although their aggressively invasive growth patterns have created problems in many areas, exotic buckthorns are still legally sold and planted as ornamentals.

Common buckthorn is a problem species mainly in the understory of southern oak, oak-beech, maple, and riparian woods, prairies, and savannas. It also occurs in thickets, hedgerows, pastures, abandoned fields, roadsides, and on rocky sites. It aggressively competes with local flora, mainly on well-drained soils.

Both buckthorns are characterized by long distance dispersal ability, prolific reproduction by seed, wide habitat tolerance, and high levels of phenotypic plasticity (adjusting physical appearance to maximize environmental conditions). Under full sun conditions, they can begin to produce seed a few years after establishment. Fruit production may be delayed for 10 to 20 years in shaded habitats. Common buckthorn flowers from May through June and fruit ripens August through September; glossy buckthorn blooms from late May until the first frost and produces fruit from early July through September. The abundant fruits are eaten birds, thus encouraging the long-distance dispersal of horticultural plantings. Seedlings establish best in high light conditions, but can also germinate and grow in the shade. The exotic buckthorns have very rapid growth rates and resprout vigorously after they have been cut. Typical of several non-native understory shrub species, buckthorns leaf out very early and retain their leaves late in the growing season, thereby shading out native wildflowers.

The first few individuals established in a natural area are usually from seeds transported by birds. Once these individuals begin to produce seed, the buckthorns can rapidly form dense thickets. The vigor of buckthorns is positively correlated to light availability.

Once established, both buckthorn species have the potential to spread very aggressively in large numbers because they thrive in habitats ranging from full sun to shaded understory. Both species cast a dense shade as they mature into tall shrubs. This shading has a particularly destructive effect on herbaceous and low shrub communities, and may prevent the establishments of tree seedling.

As with all invasive species, buckthorns in natural areas are most effectively controlled by recognizing their appearance early and removing isolated plants before they begin to produce seed. With large infestations, the largest seed-producing plants should be removed first.

Prescribed burns in early spring and fall may kill seedlings (especially in the first year of growth), larger stems, and top-killed mature buckthorns, although this method has met with mixed results. Burning is preferable for fire-shaped communities, but should not be used if it adversely affects the community. Burning annually or biannually to control buckthorns may have to be continued for several years depending on the extent of establishment and the seedbank, which general lasts two to three years. It is generally difficult to burn in dense buckthorn stands as the understory is typically well-shaded, allowing little fuel build-up.

In high quality natural areas where the use of chemicals is a concern, small patches of plants up to 0.4 inch diameter can be pulled when the soil is moist. Larger plants 0.5 inch to 1.5 inch diameters can be dug or pulled using a weed wrench. Disturbed soil will result from these techniques, and should be tamped down to minimize seeding.

Girding (removed phloem connection of roots to shoots while retaining the xylem connection of shoots to roots) or cutting stems between December and March may not be very effective unless followed by an application of glyphosate herbicide.

Chemical control methods are best done during the fall when most native plants are dormant yet buckthorns are still actively growing. This lessens the risk of affecting nontarget plants. The buckthorns' green leaves will provide easy recognition and allow for a thorough treatment at this time. Control methods are also effective in the growing season, but there is more risk of affecting non-target plants, and the effectiveness of the treatment is generally lower. Winter application of chemicals has proven to be successful as well, and further lessens the risk of damaging non-target species.

During the growing season, cutting stems off near ground level and treating them with glyphosate successfully curbs sprouting. Immediately after cutting, a 20%-25% active ingredient (a.i.) glyphosate should be applied to the stumps. Resprouts should be cut and treated again, or sprayed with a hand sprayer of 1.5% a.i. glyphosate (approved for use over water) solution to the foliage. Foliar applications over non-water sites can also use 2% triclopyr solution or 2 oz. Escort® and surfactant mix. Foliar application of herbicides using a backpack sprayer is effective, but less selective.

Treatment for common buckthorn in the spring and fall with a mixture of 25% a.i. triclopyr (formulated for oil dilution), a spreading agent (10%), and bark oil (65%) has been successful in Missouri . The triclopyr concentration may be increased to 30% in the dormant season. For stems larger than 2 inches, spray all the way around the stem. For smaller stems, spraying one side is sufficient. This treatment may not be effective on larger trees.

Fosamine, a non-selective bud inhibitor for woody species, can be applied as a basal bark treatment in the fall at 3% a.i. concentration in winter.