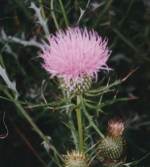 DESCRIPTION: Canada thistle is a 2 to 5 foot dioecious perennial forb with slender, grooved stems that branch only at the top. Stems are slightly hairy when young and progressively more hairy as the plant matures. The leaves are smooth, oblong, tapering, somewhat lobed, and characterized by crinkled edges with numerous spines along the margins. Numerous and fragrant purple flowers grow to 3/4 inch in size from July to September. The small, light-brown seeds are slightly tapered, and have a tuft of tan hair loosely attached to the tip to enable wind dispersal. 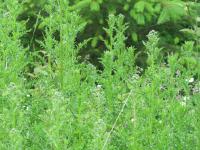 DISTRIBUTION AND HABITAT: Canada thistle is native to Europe, not Canada, as its name suggests. Its current range encompasses the northern portion of the United States east of the Rocky Mountains. Canada thistle is considered a noxious weed under Wisconsin law and should not be allowed to go to seed.

Canada thistle thrives in disturbed areas and in a wide variety of soils. In undisturbed prairies or shady woodlands, the plant becomes tall and lanky with few flowers. Although a high water table limits root development, it sometimes occurs in wetlands where water levels fluctuate (such as stream banks and ditches), and in wet prairies or sedge meadows adjacent to disturbed areas. It is abundant along roadsides and its seeds are spread by mowing after flowering has begun.

LIFE HISTORY AND EFFECTS OF INVASION: Canada thistle is an exotic, herbaceous, clone-forming perennial. The species is found in agricultural areas throughout Wisconsin. This thistle does not pose a serious threat to high quality natural areas, however, it can greatly reduce species diversity in old fields, disturbed natural areas, or areas under restoration. It is important to control this species prior to restoration work.

The plant grows in clonal patches of all female or male plants. As a result, some patches produce seeds and others do not. Seeds mature quickly and are capable of germinating within 8 to 10 days after the flowers open, even if the plants are cut when flowering. Most seeds germinate within one year, but may remain viable in the soil for up to 20 years. Seeds are mostly dispersed by wind.

The root system is usually within a foot of the surface, but may extend 6 feet deep or more in loose, well-tilled soil. The horizontal roots stemming from the fibrous taproot of a single plant can spread 10 to 12 feet in one season, resulting in a circular infestation 20 feet across. Aerial shoots are sent up in 2 to 6 inch intervals, and generally produce basal leaves the first year and flowering stems the next year.

CONTROLLING CANADA THISTLE
Mechanical Control:A buffer zone should be maintained between the preserved area and external sources of thistle to prevent vegetative invasion. Plants within wind-dispersal range should also be controlled prior to restoration. In a good quality natural area, routine mowing or selective cutting effectively reduces an infestation within 3 or 4 years. Use a scythe or other sharp tool for selective cutting. The ideal time to cut is in the very early bud stage when food reserves are at their lowest point. Plants cut 8 days or more after flowers have opened should be removed from the site because seeds mature quickly. Cutting should be completed prior to flowering and seed set.

Late spring burns effectively discourage this species, whereas early spring burns can increase sprouting and reproduction. Healthy, dense prairie vegetation can produce enough competition to reduce the abundance of Canada thistle. Encouraging the development of communities with native species is the best prevention for the establishment of Canada thistle.

For light to moderate infestations, repeated pulling, hand-cutting or mowing with a brush cutter is also an option. Plants should be pulled or cut at least three times during the growing season -- for example, in June, August, and September. Some persons have had success killing individual plants by cutting the top and putting table salt down the hollow stem.

Dense infestations of Canada thistle on large sites other than high-quality natural areas can be controlled by mowing close to the ground while the plant is in full bloom or just before flowering. Control will take a few years. If seeds are ripe, cut flower-heads must be removed from the site immediately to avoid further seed dispersal.

Chemical Control: Control of this species with herbicides in natural areas is not recommended, as the herbicide can damage native vegetation more than the damage caused by the thistle. However, spot application of the amine formulation of 2,4-D using a wick applicator or hand sprayer can control individual stems if necessary.

Infested lands that are not considered high quality natural areas may be controlled using a foliar application of a 1-2% active ingredient solution of glyphosate in spring when plants are 6-10 inches tall.