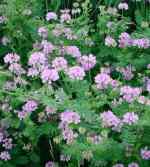 DESCRIPTION: Crown vetch is an herbaceous perennial legume with creeping stems 2-6 feet long, and leaves consisting of 15-25 pairs of oblong leaflets. This species has a reclining growth habit and rhizomes that can grow up to ten feet long, thus contributing to rapid and extensive 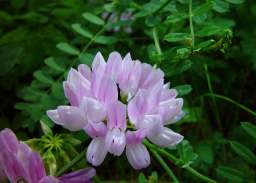 DISTRIBUTION AND HABITAT: Crown vetch (also known as "trailing crown vetch") is an exotic perennial frequently used as a ground cover for erosion control and as a green fertilizer crop. It is used as a bank stabilizer along roads and waterways. The plant's original habitat includes Europe, southeast Asia and northern Africa. The plant's distribution in the U.S. encompasses most of the northern U.S. east of South Dakota.

Crown vetch has been planted extensively in the northern two-thirds of the United States on road banks and other areas prone to erosion. This plant readily escapes cultivation; it may be found invading remnant prairies, woodland edges, agricultural fields, hayfields, pastures, and the banks and gravel bars of streams. It has typically been planted along roadsides and other right-of-ways, but quickly spreads into adjacent prairies and open fields. Crown vetch prefers full sunlight, but healthy populations have been found in partial shade.

LIFE HISTORY AND EFFECTS OF INVASION: Crown vetch is a serious management threat to natural areas due to its seeding ability and rapid vegetative spreading by creeping roots. Flowers appear from May to August and produce few to several seeds. Seeds can remain dormant and viable for over fifteen years.

CONTROLLING CROWN VETCH:
Very little research information is currently available regarding the control of crown vetch. Research has largely been restricted to the establishment and management of this perennial legume. As a result, a limited number of control measures have become available from the unpublished notes of active natural resource managers. Further field research is needed to adequately address this species. However, preventative measures can and should be implemented: do not use crown vetch for erosion control. Encourage your local highway department to stop using it and replace it with less invasive species for roadside use.

Mechanical Methods: In fire-adapted communities, prescribed burning in late spring can be an effective control. Burns may need to be repeated for several years to achieve adequate control.

Where feasible, late spring mowing for several successive years can control this species. Another technique is to mow twice every year: in June and in late August, corresponding with successive leaf-out periods.

Chemical Control: The herbicide 2,4-D amine (dimethylamine salt of 2,4--D) is a low volatility formulation that can be foliar-applied in early spring when crown vetch is growing actively. 2,4-D amine should be applied by hand sprayer at the recommended application rate on the label for spot application. Phenoxy herbicides are broadleaf-selective plant growth regulators that will not harm grasses, but precautions must be taken in the vicinity of non-target broad-leaved plants. To reduce vapor drift, use an amine rather than an ester formulation of 2,4-D.

A 2% active ingredient (a.i.) solution of triclopyr in water has also been successful in controlling large infestations. Like 2,4-D, triclopyr is advantageous because it is dicot-specific and does not affect grasses beyond some temporary browning.

Glyphosate is a broad-spectrum, translocated herbicide that can be foliar-applied as a 1 or 2% a.i. solution during early spring when the plant is actively growing. Glyphosate is nonselective, and care should be taken to avoid non-target plants. To insure good foliar coverage, the previous year's growth should be burned to eliminate duff accumulation and to expose new growth. A follow-up application of glyphosate may be necessary the following fall or early spring to combat regeneration from underground parts or seed.

The herbicide clopyralid has been used successfully to treat roadside populations of crown vetch. This herbicide shows promise because it is even more specific than triclopyr in the plant families it affects; specifically, this herbicide kills leguminous species but does not affect grasses and most other plant families. However, further research is needed.

When applying any of the herbicides described above, spot applications should be done uniformly with a hand sprayer to ensure that the entire leaf is wetted. Do not spray so heavily that herbicide drips off the target species. Native plants, left unharmed, will be important in recolonizing the site after crown vetch is controlled. Reseeding of native plants may be necessary where infestations of crown vetch are severe. Planting an intermediate cover crop may be appropriate.

All of these methods may need repeated applications over several years to effectively eradicate populations of crown vetch that are well established.