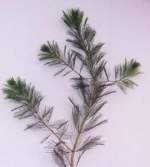 DESCRIPTION: Eurasian water milfoil is a submersed aquatic plant native to Europe, Asia, and northern Africa. It is the only non-native milfoil in Wisconsin. Like most of the native milfoils, the Eurasian variety has slender stems whorled by submersed feathery leaves. The stems of Eurasian water milfoil tend to be limp, and may show a pinkish-red color. The 4-petaled, pink flowers of Eurasian water milfoil are located on a spike that rises a few inches out of the water. The leaves are typically divided into 12 or more pairs of threadlike leaflets. The most common native water milfoils tend to have whitish or brownish stems, and leaves that divide into fewer than 10 pairs of leaflets. Coontail is often mistaken for the milfoils, but its leaves are not feathery, but rather branch once or twice with several small teeth along the leaves. Bladderworts can also be mistaken for Eurasian watermilfoil, but they are easily distinguished by the presence of many small bladders on the leaves, which serve to trap and digest small aquatic insects.

DISTRIBUTION AND HABITAT: Eurasian milfoil first arrived in Wisconsin in the 1960's. During the 1980's, it began to move from several counties in southern Wisconsin to lakes and waterways in the northern half of the state. As of 1993, Eurasian milfoil was common in 39 Wisconsin counties (54%) and at least 75 of its lakes, including shallow bays in Lakes Michigan and Superior and Mississippi River pools. 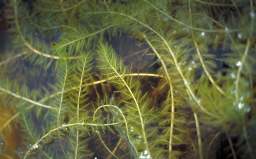 Eurasian water milfoil grows best in fertile, fine-textured, inorganic sediments. In less productive lakes, it is restricted to areas of nutrient-rich sediments. It has a history of becoming dominant in eutrophic, nutrient-rich lakes, although this pattern is not universal. It is an opportunistic species that prefers highly disturbed lake beds, lakes receiving nitrogen and phosphorous-laden runoff, and heavily used lakes. Optimal growth occurs in alkaline systems with a high concentration of dissolved inorganic carbon. High water temperatures promote multiple periods of flowering and fragmentation.

LIFE HISTORY AND EFFECTS OF INVASION: Unlike many other plants, Eurasian water milfoil does not rely on seed for reproduction. Its seeds germinate poorly under natural conditions. It reproduces vegetatively by fragmentation, allowing it to disperse over long distances. The plant produces fragments after fruiting once or twice during the summer. These shoots may then be carried downstream by water currents or inadvertently picked up by boaters. Milfoil is readily dispersed by boats, motors, trailers, bilges, live wells, or bait buckets, and can stay alive for weeks if kept moist.

Once established in an aquatic community, milfoil reproduces from shoot fragments and stolons (runners that creep along the lake bed). As an opportunistic species, Eurasian water milfoil is adapted for rapid growth early in spring. Stolons, lower stems, and roots persist over winter and store the carbohydrates that help milfoil claim the water column early in spring, photosynthesize, divide, and form a dense leaf canopy that shades out native aquatic plants. Its ability to spread rapidly by fragmentation and effectively block out sunlight needed for native plant growth often results in monotypic stands. Monotypic stands of Eurasian milfoil provide only a single habitat, and threaten the integrity of aquatic communities in a number of ways; for example, dense stands disrupt predator-prey relationships by fencing out larger fish, and reducing the number of nutrient-rich native plants available for waterfowl.

Dense stands of Eurasian water milfoil also inhibit recreational uses like swimming, boating, and fishing. Some stands have been dense enough to obstruct industrial and power generation water intakes. The visual impact that greets the lake user on milfoil-dominated lakes is the flat yellow-green of matted vegetation, often prompting the perception that the lake is "infested" or "dead". Cycling of nutrients from sediments to the water column by Eurasian water milfoil may lead to deteriorating water quality and algae blooms of infested lakes.

CONTROLLING EURASIAN WATER MILFOIL: Preventing a milfoil invasion involves various efforts. Public awareness of the necessity to remove weed fragments at boat landings, a commitment to protect native plant beds from speed boaters and indiscriminate plant control that disturbs these beds, and a watershed management program to keep nutrients from reaching lakes and stimulating milfoil colonies--all are necessary to prevent the spread of milfoil.

Monitoring and prevention are the most important steps for keeping Eurasian water milfoil under control. A sound precautionary measure is to check all equipment used in infested waters and remove all aquatic vegetation upon leaving the lake or river. All equipment, including boats, motors, trailers, and fishing/diving equipment, should be free of aquatic plants.

Lake managers and lakeshore owners should check for new colonies and control them before they spread. The plants can be hand pulled or raked. It is imperative that all fragments be removed from the water and the shore. Plant fragments can be used in upland areas as a garden mulch.

Mechanical Control: Mechanical cutters and harvesters are the most common method for controlling Eurasian water milfoil in Wisconsin. While harvesting may clear out beaches and boat landing by breaking up the milfoil canopy, the method is not selective, removing beneficial aquatic vegetation as well. These machines also create shoot fragments, which contributes to milfoil dispersal. Harvesting should be used only after colonies have become widespread, and harvesters should be used offshore where they have room to turn around. Hand cutters work best inshore, where they complement hand pulling and bottom screening. Bottom screening can be used for severe infestations, but will kill native vegetation as well. A diver-operated suction dredge can be used to vacuum up weeds, but the technique can destroy nearby native plants and temporarily raise water turbidity.

Hand pulling is the preferred control method for colonies of under 0.75 acres or fewer than 100 plants. The process is both thorough and selective (not to mention time-consuming); special care must be taken to collect all roots and plant fragments during removal. Sites remote from boat traffic can be covered with bottom screens that are anchored firmly against the lake bed to kill grown shoots and prevent new sproutings, but screens must be removed each fall to clean off sediment that encourages rooting. Buoys can mark identified colonies and warn boaters to stay away.

Chemical Control: Herbicide treatment is not recommended because it is typically disruptive to aquatic ecosystems and not selective in the vegetation it affects, thus threatening native plants.

Biological Control: Eurhychiopsis lecontei, an herbivorous weevil native to North America, has been found to feed on Eurasian water milfoil. Adult weevils feed on the stems and leaves, and females lay their eggs on the apical meristem (top-growing tip); larvae bore into stems and cause extensive damage to plant tissue before pupating and emerging from the stem. Three generations of weevils hatch each summer, with females laying up to two eggs per day. It is believed that these insects are causing substantial decline in some milfoil populations. Because this weevil prefers Eurasian water milfoil, other native aquatic plant species, including northern watermilfoil, are not at risk from the weevil's introduction. Twelve Wisconsin lakes are currently part of a two-year DNR project studying the weevil's effectiveness in curbing Eurasian water milfoil populations. The fungi Mycoleptidiscus terrestris is also under extensive research.