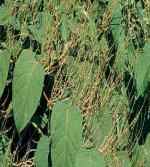 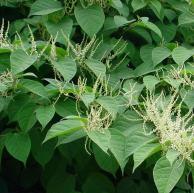 Japanese knotweed, in the buckwheat family, is a perennial that grows to heights of 5-10 feet in large clones up to several acres in size. The arching stems are hollow and bamboo-like, a reddish-brown to tan color; they die, but remain upright through the winter. Mature leaves are 3-5” wide and 4-9” long, lighter on the lower surface, and egg to spade shaped; young leaves are heart-shaped. Lacy 2 inch long clusters of tiny greenish-white flowers are produced in late summer and held upright at the leaf base. Japanese knotweed reproduces occasionally by seed, but spreads primarily by extensive networks of underground rhizomes, which can reach 6 feet deep, 60 feet long, and become strong enough to damage pavement and penetrate building foundations.

Another much less widespread invasive species, giant knotweed (Polygonum sachalinense), is similar, but can grow taller and has much larger leaves (up to 12” long). The upper surface of Japanese knotweed has an extremely fine-sandpaper feel in contrast to the fine-leather feel of giant knotweed.

Introduced in the late 1800s, Japanese knotweed is now found throughout much of North America. It is especially widespread in the coastal Pacific Northwest, in the East from Newfoundland to North Carolina, and in the Midwest. It is often considered to be the most troublesome weed in Great Britain. It grows in a variety of habitats, in many soil types, and a range of moisture conditions. Of particular concern is its tendency to invade valuable wetland habitat and line the banks of creeks and rivers where it often forms an impenetrable wall of stems, crowding out native vegetation and leaving banks vulnerable to erosion when it dies in winter. It is also found along roads, railroads, utility pathways, and strip-mining areas. In addition to spreading by rhizomes and seed, it is often spread by streams, by transportation of fill dirt, or through roadside plowing. 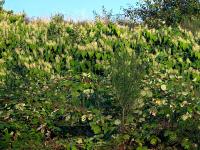 Attempting to remove Japanese knotweed by pulling or digging is generally ineffective due to its extensive underground rhizome network; it may even promote further spreading if pieces of the plant are not disposed of properly. Herbicide application has been effective, when the entire clone is treated repeatedly. Applications of herbicides containing glyphosate are typically used after spring leaf out and on resprouts emerging after cutting.