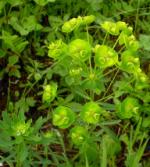 DESCRIPTION: Leafy spurge is a member of the euphorbiaceae family, and ranges 6 to 36 inches in height. Although the plant appears to be delicate, its strength is in its extensive root system. Erect stems support linear, alternate, and apetiolate leaves of a bluish-green hue. Its bloom is an inconspicuous, yellow-green umbel near the top of the stem. The yellow-green bracts are the most colorful and conspicuous part of the plant. A milky white sap (latex) is present in all parts of the plant, and aids in identification. New infestations often appear in small clumps, which quickly spread.

Leafy spurge is legally classified as a noxious weed in nineteen states including Wisconsin, which requires landowners to attempt eradication of the species.

DISTRIBUTION AND HABITAT: Leafy spurge is a deep-rooted, Eurasian perennial that is adapted to a wide range of conditions. The species was first recorded in the U.S. in 1827, and was probably introduced accidentally in a mix of agricultural seed stock, or intentionally for its attractive, yellow, heart-shaped bracts. The plant occurs primarily in non-cropland habitats, including roadsides, prairies, savannas, and woodlands. It is tolerant of a wide range of habitats, from damp to very dry soils. In Wisconsin it is usually found in lighter, dry soils. Leafy spurge prefers sunny conditions, but can also grow in savanna habitats. The related cypress spurge (Euphorbia cyparissias) in typically not as aggressive, but has been known to invade some dry grasslands in western Wisconsin. It is an extremely difficult species to control.

LIFE HISTORY AND EFFECTS OF INVASION: Leafy spurge possesses several characteristics that allow it to spread rapidly and displace native grasses and forbs in only a few years. The species puts on growth early in the spring, allowing it to shade natives and dominate available moisture and nutrients. It is allelopathic, which means it emits chemicals from its roots that retard the growth or seed germination of other plants. Also, like other exotic invasive plants, it lacks the insects and fungi that preyed on it in its native land. There are a number of spurges that hybridize with leafy spurge. Often these hybrids are collectively referred to as "leafy spurge." The plant can reach densities of up to 1,800 stems per square yard. Roots are woody, tough, and can reach depths up to fifteen feet, and lateral spread of up to thirty-five feet. This deep root system makes eradication of the species extremely difficult. Vegetative reproduction from both crown and root buds contribute to the weeds persistence. Even if the foliage of the plant is destroyed, the roots will regenerate new shoots.

The plant's extraordinary seed dispersal also contributes to the plant's success. Leafy spurge reproduces readily from seed dispersed with an explosive ejection from the seed capsule. The plant can expel its seeds to distances up to twenty feet and has a high germination rate. Once established, the plant reproduces and spreads rapidly via vegetative reproduction. Shoots emerge in late March. Leafy spurge is most easily recognized by its yellow-green bracts that exist from May to the end of July. Seed development continues for up to six weeks. This species usually ceases to grow during the hottest and driest weeks of July and August.

Leafy spurge can be catastrophic to grasslands for both economic and ecological reasons. The plant is not palatable to cattle and is considered a serious pest in the grasslands of the Great Plains. It is estimated that the plant reduces the productivity of grazing land by 50 to 75 percent. It currently inhabits about three million acres of rangeland in the U.S, and economic losses in just four states alone exceed $100 million annually. In natural areas, leafy spurge reduces species diversity and habitat for wildlife, creating a monoculture with little to no forage or shelter value.

CAUTION: Care should be taken to avoid skin and eye contact with the milky sap of this plant. Proper clothing (gloves and a long-sleeved shirt) must be worn to prevent blisters, burns and blindness.

Mechanical Control: In the Great Plains, much effort has been channeled towards finding a control method for leafy spurge. Most agree that control depends on destruction of the root system. No mechanical methods have been found to work effectively. Fire, cultivation, obscuring sunlight, and mowing have not been successful. Hand-pulling, digging, and tilling are only successful if the entire root system can be excavated, and may increase the number of plants if any remnants remain in the soil.

Chemical Control: Although biological control research is promising, land managers who find small infestations should take immediate action to control this plant with herbicide. Doing nothing will result in further spread, make future control efforts more expensive and less successful and have a greater impact on native grasslands and rangelands. Annual maintenance must occur, because new plants will appear for years to come.

Imazapic is a selective herbicide that has been most effective on leafy spurge. The best method for control is to attack the plant two times in its growing season. In late spring or early summer (before seeding), remove blooms by cutting or mowing, leaving as many leaves as possible. In the fall apply Impazapic just before the first killing frost, when the milky sap is still present. Cut plants should be marked with flagging in the spring for easy identification in the fall. This herbicide may harm cool season grasses but should not harm warm-season prairie grasses. When using a backpack sprayer, .75 – 1 oz of herbicide per gallon of water should be used. Unfortunately only government agencies and QVC Certified Applicators are allowed to purchase this chemical, trade name Plateau. Check with your local government agency to see if control assistance is available.

A combination of 2,4-D amine plus glyphosate can be used to treat small patches, but should not be used on high quality natural areas. This chemical combination is nonselective, requires repeated application and has poor long-term control. Glyphosate alone may be used to treat small patches, but requires repeated application and is less effective. Dicamba has also been cited for selective broadleaf weed control.

Biological Control: Research of biological control began in the 1960’s. Most of the testing occurs in Europe, where the biocontrol organisms are native. This eliminates the possibility of accidental escapes. Fifteen insects have been tested and approved for release in North America. The USDA has experimentally released six insects: five beetles and one midge. Two species of flea beetle have emerged as the most effective biological control agents and are widely distributed in the Great Plains. Different stages of the beetles feed on the foliage and roots. Although quite effective, they will not completely eradicate leafy spurge. The beetles stress the plant enough to allow naturally occurring plan pathogens to enter the plant and cause additional damage, which delay emergence and reduce stem density. Experimental releases, in a few sites in Wisconsin since 1995, have shown good insect reproduction and some impact on spurge is becoming evident.

The Forest Service has begun to pasture goats in areas infested with leafy spurge. Angora goats and Targhee sheep like to eat leafy spurge flowers, thereby reducing seed production. In native prairies it is recommended to use these grazers in the spring when most natives are still dormant. Although this is less costly than chemical control measures, it does not limit the spread by rhizomes.