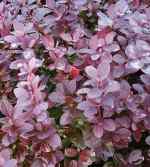 DESCRIPTION: Japanese barberry is a compact, spiny shrub that commonly grows from two to three feet tall (although it can grow up to six feet in height). Roots are shallow but tough. The smooth-edged leaves range from oval to spatulate in shape and are clustered in tight bunches close to the branches. The single spines bear small leaves in their axils. Yellow flowers bloom in May, are about one third of an inch wide, and are solitary or in small clusters of 2-4 blossoms. The bright-red fruits mature in mid-summer and hang from the bush during autumn and into winter. The berries are small, oblong, and found singly or in clusters. Several cultivars of this species are sold as ornamentals.

A similar species, European barberry (Berberis vulgaris) is also an invasive non-native. It can be distinguished from the Japanese barberry by its spiny toothed leaves and flowers in a long raceme. Both species can be controlled using the techniques discussed below.

DISTRIBUTION AND HABITAT: Japanese barberry prefers well-drained soils, although it has been found in wet, calcareous situations, (specifically in a black ash swamp). It is typically found in locations of partial sunlight such as a woodland's edge; it can survive well under the shade of an oak canopy. It is also found along roadsides, fences, old fields, and open woods.

LIFE HISTORY AND EFFECTS OF INVASION: Japanese barberry was introduced from Japan around 1875. It is commonly planted for ornamental reasons (its scarlet fruit and autumnal foliage in shades of orange, red, and crimson make it an attractive hedge), as well as for wildlife and erosion control. It easily naturalizes because its fruit is often eaten by birds, which subsequently disperse the seed. Its range in North America extends from Nova Scotia south to North Carolina, and westward to Montana.

Japanese barberry can be found invading oak woodlands and oak savannas; it is widespread in Wisconsin woodlands south of the tension zone. A related non-native species, B. vulgaris, was widely planted for similar purposes, but has been exterminated because it is the alternate host of black rust, a disease that affects wheat crops.

The plant regenerates by seed and creeping roots. Birds and rabbits are known to eat the seeds and distribute the species. Branches root freely when they touch the ground; thus allowing single plants to become quite large. Japanese barberry competes poorly with grasses and may succumb to drought conditions.

CONTROLLING JAPANESE BARBERRY
Very little is known about the control of Japanese barberry. What information is available has been gathered from the notes of natural resource managers.

Mechanical Control: Mechanical removal of the plant is recommended in early spring because barberry is one of the first shrubs to leaf out, thereby making identification easier. Cutting, pulling or digging are effective in areas where there are only a few plants. A hoe, weed wrench, or mattock should be used to uproot the bush and all connected roots. Thick gloves are recommended for protection from the shrub's spines.

Japanese barberry may be relatively easy to control in fire-adapted communities. Fire is thought to kill these plants and prevent future establishment.

Chemical Control: Triclopyr has been used as a cut-stump treatment with success. Other herbicides labeled for brush control, such as glyphosate, may prove to be effective. Care in application is essential because glyphosate is a non-selective herbicide that can kill native species as well. Herbicides are suggested only for plants that are difficult to remove mechanically.