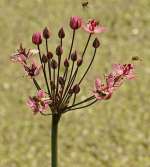 Flowering rush is a perennial aquatic herb that emerges each spring from winter-hardy rhizomes. Emergent leaves are stiff, narrow, sedge-like (3-edged or triangular in cross-section) and up to 3 feet above the water surface. In deep water, the plant can be entirely submerged. Submerged plants have limp leaves and do not flower. Often unnoticed among other wetland plants until it blossoms, flowering rush has a distinctive spray of attractive white, pink, or purple flowers on a tall stalk. Blooming in late summer to early fall, flowers have 3 petals, 3 sepals and red anthers.

The leaves of flowering rush resemble bur-reed (Sparganium spp.), another shallow-water emergent that is 1 to 4 feet tall. The several species of bur-reed in Wisconsin all have keeled (V-shaped) leaves and female flower parts that resemble small, spiked balls.

Brought from Asia as an ornamental, flowering rush has escaped from water gardens and now is found in several northern states including Wisconsin. It prefers shallow or slow moving water where it grows as an emergent plant in marshes, backwaters and along shorelines. Plants spread by underground rhizomes, forming dense stands and crowding out native species. Reproduction from seed is uncommon.

Due to resemblance of several native shoreline plants when not in flower, accurate identification of flowering rush must be made. Plants can be cut below the water surface several times during the summer. They will re-sprout, but eventually will decrease in abundance. Small populations can be hand-dug - but extreme care must be taken to remove all root fragments. When the root system is disturbed, small reproductive structures can break off and spread to other areas. All plant parts should be composted away from aquatic environments. Use of chemical herbicides in all Wisconsin aquatic environments (streams, lakes & wetlands) requires a permit from the DNR. Mechanical harvesting may require a permit.