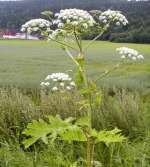 Giant hogweed -- a member of the parsley family -- is striking due to its huge size. In the first year of growth, plants form a bush-like rosette of compound leaves (1 to 5 feet wide) that are deeply incised and pointed. Plants flower in their second year (or later, depending on maturity). Flowering plants are 8 to 15 feet tall, topped with a group of broad, flat-topped umbels of white flowers. Flower stalks can be 2 to 4 inches in diameter, with coarse white hairs and reddish-purple mottling. The bottoms of leaves also have coarse, dense hairs. The plant produces thousands of seeds, then dies after flowering.

Giant hogweed, a native of Asia, is present in northeast and upper Midwest states including Michigan, New York, Pennsylvania, and Maine. It currently is regulated by the USDA as a noxious weed. Giant hogweed disperses by seed and naturalizes easily. It is found in a variety of disturbed areas such as roadsides, empty lots and woodland edges but prefers areas with moist soils and some shade. It can be especially troublesome along streambanks where it crowds out native vegetation, leads to soil erosion and readily disperses downstream by seed.
Caution! If sap from hogweed's leaves and stems gets on skin in the presence of sunlight, it can cause a severe, blistering burn that appears a day or two after exposure. Wild parsnip, cow parsnip and great angelica all can cause a similar phytophotodermatitis reaction.

Because of the danger from its sap, cover all skin and protect eyes when working with this plant. Small populations can be hand-dug. Repeated mowing or cutting weakens the plants, but the large root can remain alive for many years. Treating foliage with glyphosate or triclopyr is effective if done early in the spring or on resprouts after cutting. Do not allow hogweed to go to seed.  Giant hogweed control methods.