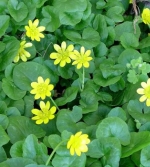 Other names for this plant include:

Leaves & stems: Leaves are dark-green, shiny, and kidney to heart-shaped on short stalks. Leaves emerge from a basal rosette in early spring before canopy trees leaf out.

Flowers: Flowers are bright butter-yellow, glossy, and usually have 8 petals (although sometimes up to 12), arranged around central disk. Numerous 1" flowers are borne singly on stalks. Flowers open in early spring, March to April.

Fruits & seeds: This species does produce viable seed, up to 70 seeds per plant. After flowering, aerial vegetation dies back and entire plants can be dead by June.

Roots: Above-ground whitish bulblets are produced on the stem axils, usually forming after flowering. Below-ground rhizomes are thick, finger-like tubers. These storage organs keep the plant alive through summer-fall when above-ground portions of the plant have senesced.

This species is unrelated to greater celandine (Cheidonium majus).