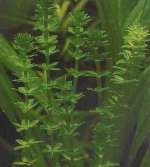 Hydrilla is a prolific, rapidly-growing submerged aquatic plant that can thrive in water from a few inches to 20 feet deep. Leaves are small (1/2 - 3/4 inches), triangular-pointed and occur in whorls of 4 to 8 leaves along the stem. Unlike many native water plants, hydrilla leaves have serrated edges and one or more protruding barbs or bumps along the midrib on the underside. They are usually green but may bleach in the sun to yellow or brown. Stems are heavily branched near the surface and grow horizontally, forming dense mats of vegetation. Small tubers are present at the rooted base of the plant.

Hydrilla is often confused with the native waterweeds (Elodea canadensis and Elodea nuttallii), whose leaves -- typically in whorls of 3 -- appear smooth-edged and lack spines on the midrib. It also resembles the invasive Brazilian waterweed (Egeria densa), which is not yet in Wisconsin and has finely serrated leaves (3/4 - 1.5 inches) in whorls of 3 to 6.

Hydrilla - a native of Africa - was brought to the U.S. as an aquarium plant. It is now widespread in southern states and has been reported as far north as Washington, Indiana and Maine. In summer 2007 hydrilla was documented in a private artificial pond in Marinette County, Wisconsin. The pond is not connected to any natural aquatic systems, and the hydrilla population is believed to be contained at this site. Wisconsin's Department of Agriculture, Trade and Consumer Protection is taking the lead on investigating this occurrence. Hydrilla has not been found in any natural lakes or rivers in Wisconsin. If you believe that you have found hydrilla in a Wisconsin water body contact your local DNR office.

Hydrilla has several methods of reproduction. Within a water body, branch or root fragments from broken plants can drift to new areas. Also, it can spread to new locations from plant fragments attached to boats and trailers. Turions - tiny, compact buds which form in leaf axils along the stem - break free and drift to new areas. Studies at the University of Minnesota have indicated that the turions of the monoecious form are likely to survive in northern climates. The dioecious form appears to be less cold tolerant. Tubers, which form on the roots and can lie dormant for several years, can propagate new plants. Hydrilla can grow in a wide range of conditions, including low light, flowing or still waters, shallow or deep. It out-competes the widespread invasive Eurasian water-milfoil with its even more rapid growth and reproduction. It is a serious threat to lakes and streams everywhere because of its adaptability.

Because hydrilla is similar to native waterweeds, be sure of proper identification before beginning control measures. Plants can be collected by hand or mechanical harvesters, with all parts composted away from aquatic environments. Use of chemical herbicides in all Wisconsin aquatic environments (streams, lakes & wetlands) requires a permit from the DNR. Mechanical harvesting may require a permit.