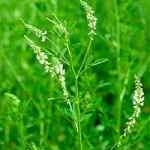 DESCRIPTION: Yellow and white sweet clover appear very similar except for the distinguishing yellow or white flowers. Yellow sweet clover is usually smaller than white sweet clover and blooms earlier. Sweet clovers are members of the legume family. They are biennial. Plants are strictly vegetative in the first year and have a small, branched stem with clover-like leaves. Leaves are divided into three finely toothed leaflets, with the middle leaflet occurring on a distinct stalk. In the second year, plants may appear bushy, and grow from three to five feet in height. The flowers are packed densely on the top four inches of an elongated stem. Each small flower is attached to the stem by a minute stalk.

DISTRIBUTION AND HABITAT: Sweet clovers are native to Europe and Asia. They were brought to North America in the late 1600's as an agricultural crop for forage and honey production. These clovers also fix nitrogen, and thus became popular as soil enhancers. The chemical used in the production of the blood thinner Warfarin was first discovered in sweet clover. Due to the economic values of white and yellow sweet clover, these species will continue to be planted despite the problems they pose for land managers.

Both species are found in all fifty states, although they are most frequently found in the states of the Upper Midwest and Great Plains. Sweet clovers grow well in direct sunlight or in partial shade. Neither species can tolerate complete shade. Sweet clovers seem to prefer calcareous or loamy soils, and are most frequently found in open, disturbed, upland habitats such as prairies, savannas, and dunes.

Both white and yellow sweet clovers are biennials. After germination in late spring or summer, the plants put their energy into developing a healthy root system. First-year plants can be found in late summer. In the second year, plants may be seen in late April or early May. By that time, individuals have a strong taproot and a root crown from which new shoots appear. Plant height is dependent on root development and growing conditions; healthier plants are taller. Sweet clovers flower from late May through September, set seed, and die. Both plants produce small, hardy seeds that remain viable in the soil for as many as thirty years.

Burning produces excellent growing conditions for clover by scarifying seeds and stimulating germination. During the next year following a burn, many flowering plants generally emerge.

CONTROLLING SWEET CLOVER:
Sweet clover can be managed using mechanical controls, and should not require chemical use.

Mechanical Control: On grasslands managed with prescribed burning, it is possible to greatly reduce sweet clover by burning two years in a row. Burning should be done early the first year (before green-up--usually in early to mid-April) to stimulate germination. The burned area should be checked in late summer for first year plants. If plants are found, another burn should be conducted the next year in early to mid May. If burning is conducted before the buds are developed, the plants will resprout. Heavily infested areas may need this burning sequence repeated after a few years. The fire may be of low intensity--just enough to touch the stems. Damaged plants wither quickly if they are not completely destroyed by fire. For small patches or those areas not completely burned, a flame gun (torch) may be used when the vegetation is damp to avoid burning surrounding prairie. Another burning strategy is to mow later in the summer, allow the cut plants to dry, and then burn. This can be stressful to the native vegetation and should not be done annually.

Small amounts of sweet clover can be controlled by hand-pulling in late fall after first-year plant root-crown buds have developed, or in May or June before second-year plants flower. Pulling is easier when the soil is wet. Plants can also be cut at ground level with brush loppers. If pulling is tried too early, many plants may be missed, and those with succulent stems may break off and resprout. But pulling must be done before seeds are set, otherwise cut plants will have to be removed from the natural area. It is necessary to inspect the area a couple of times in summer for late flowering plants.

For very dense small patches, cutting with a power brush-cutter using a heavy duty saw blade is effective. The stand should be cut just before flowering, and checked a week later for individuals missed or partly cut.

It is necessary to conduct annual inspections to remove scattered individual plants. Disturbed areas such as fox dens provide habitats that can allow sweet clover to greatly increase over time if not controlled. Habitats adjacent to managed areas should also be inspected to reduce sweet clover invasion on managed sites. Due to the long viability of sweet clover seeds (up to 30 years) and continued agricultural use, these plants generally must be managed on nearly a continuous basis.