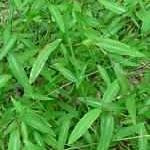 Japanese stilt grass is an annual grass that can reach 5 feet in height, but tends to grow 1 - 3 feet in a branching, sprawling, mat-like manner. Its pale green leaves alternate along a branched stalk, resembling a small, delicate bamboo. Leaves are narrow, lance-shaped, up to 3 inches long and lightly hairy. A distinguishing feature is a pale, silvery stripe of reflective hairs along the midrib of the upper leaf surface. Flower spikes - 1 to 3 inches long - appear in September and produce seed by early October.

The native perennial whitegrass or Virginia cutgrass (Leersia virginica) is similar, but lacks the silver stripe along the midrib. Stilt grass flowers late -- in mid-September -- and whitegrass flower spikes appear in August. The nodes (where leaves emerge) of stilt grass are smooth, but are hairy in Leersia. In fall, stilt grass turns yellow to pale purple, while whitegrass stays green. A non-grass look-alike is smartweed or lady's thumb (Polygonum persicaria). It can form masses of grass-like plants, but its leaves have a dark blotch and flowers are pink and bead-like.

Stilt grass has become a significant problem in forests in many eastern and Midwestern states. Although not yet known in Wisconsin, it is one of the most potentially troublesome future invasives. Stilt grass spreads rapidly due to high seed production and rooting at nodes along the stem. Often it takes hold in locations where moist soils are scoured such as along streambanks, floodplains, ditches and trails - forming a large seedbank and spreading during floods. It often outcompetes native vegetation in areas where light levels are low. Typical habitats include river corridors, forested wetlands, moist woodlands, old fields and thickets, utility rights-of-way, roadsides and lawns.

Because it is shallow-rooted, stilt grass can be pulled up at any time. Hand-pulling small infestations or mowing at peak bloom in September before seeds set will help control this species. The herbicide glyphosate has been shown to be effective and a 2% solution can be sprayed slowly and thoroughly over patches. Also, a herbicidal soap such as pelargonic acid or a grass-specific herbicide such as sethoxydim are effective. In dry areas, imazapic plus methylated seed oil can be applied pre- or post-emergence. Due to many seeds left in the soil, follow-up monitoring and treatment will be needed for years.