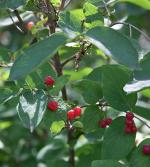 DESCRIPTION: Exotic bush honeysuckles are dense, upright deciduous shrubs (3 to 10 feet in height) with shallow roots; opposite, simple, and oval or oblong leaves; and yellow, orange, or red berries. Tartarian honeysuckle has smooth, hairless, bluish-green leaves. Morrow's honeysuckle has downy leaves, while bella honeysuckle is a hybrid between the Tartarian and Morrow's varieties. The shaggy-barked older stems and branches of the shrubs are often hollow. Flowering occurs during May and June, and produces fragrant, tubular flowers arranges in pairs. Flowers of the Tartarian honeysuckle are generally pink to crimson in color. Flowers of the other bush honeysuckle species are white and become yellow as they age.

Bush honeysuckles are easy to find in early spring when they begin leaf development one to two weeks before native shrubs. Similarly, they hold their leaves later into the fall than native species. These species can be discerned from a distance during their flower and fruit periods in late spring and midsummer.

DISTRIBUTION AND HABITAT: Bush honeysuckles can live in a broad range of plant communities with varying moisture and shade levels. Most natural communities are susceptible to invasion by one or more of the species, with or without previous invasions. Woodlands are most affected, and are particularly vulnerable is the habitat is already disturbed. Bush honeysuckles thrive in sunny, upland habitats, including forest edges, roadsides, pastures, and abandoned fields. They can also be found in fens, bogs, and lakeshores.

Bush honeysuckles are native to Asia and western Europe. Tartarian honeysuckle was introduced to North America as an ornamental in 1752. The others were introduced in the late 1800's. Distribution is typically near large urban areas, but rural infestations have occurred where the species were introduced to provide wildlife with cover and a food source. Bush honeysuckles have naturalized from New England south to North Carolina and west to Iowa. Exotic honeysuckles have become widespread in Wisconsin. Their proliferation is due largely to horticultural plantings, especially in more urban southern and eastern Wisconsin. However, there are pockets of infestation in rural areas where honeysuckles were planted to improve wildlife habitat.

LIFE HISTORY AND EFFECTS OF INVASION: The widespread distribution of bush honeysuckle is aided by birds, which consume the ripened fruit in summer and disperse the seeds over long distances. The seeds appear to require a cold stratification period to break dormancy. Seedlings establish in sparse vegetation, and are usually found growing under tall shrubs or trees.

Their vigorous growth inhibits development of native shrub and ground layer species; eventually they may entirely replace native species by shading and depleting soil moisture and nutrients. The early leafing of these species is particularly injurious to spring ephemerals, which have evolved to bloom before trees and shrubs have leafed out.

Mechanical Control: Since honeysuckle roots are fairly shallow, small- to medium-sized plants can often be dug or pulled. Plants are particularly easy to remove in spring when the soil is moist. A shovel or grubbing hoe will often loosen the roots enough to allow a fairly large plant to be pulled. A mattock or weed wrench can also be used. In sensitive areas, this type of physical removal may disturb the soil and lead to more invasions, in which case it should be avoided. Soil should be tamped down to discourage further establishment of honeysuckle seedlings.

In fire-adapted communities, spring prescribed burning may kill seedlings and top-kill larger plants, although results have been mixed. Resprouts may occur, so repeated prescribed burning annually or biennially for several years may be necessary.

Chemical Control: Bush Honeysuckles can be controlled by cutting the stems at the base with brush-cutters, chain saws or other tools. After cutting, stumps should be treated immediately with a 20% active ingredient (a.i.) glyphosate solution using a low-pressure, hand-held sprayer, sponge applicator, or contact solution bottles. Stumps can be treated later after cutting with the same herbicide solution, although it may not be as effective. Two cuts per year--the first in early spring followed by one in early autumn--are recommended. If not followed by herbicide treatment, cuts made in winter will encourage vigorous resprouting when the plant comes out of dormancy. Triclopyr formulated for water dilution is not effective on this species: tryclopyr formulated for dilution in diesel fuel can be used for applications on cut stumps throughout the year, although winter application has in some cases proven to be 100% effective, whereas spring treatment has shown 70-80% effectiveness. If stump treatment is not done at the time of cutting, foliage on the resprouts may be sprayed, taking care of non-target plants.

Where burning is not possible a 1.5% a.i. glyphosate solution can be sprayed to cover the foliage. Spraying after the plant blooms may kill mature and seedling plants. Spraying prior to the emergence of native shrubs and ground flora is the safest time to spray without impacting native species. In wetlands, glyphosate formulated for use over water must be used.

Both mechanical and chemical control methods must be repeated for at least three to five years in order to stop new plants emerging from the seed bank. Re-invasion by bush honeysuckles may be aided by "underplanting" disturbed areas with tolerant native species.