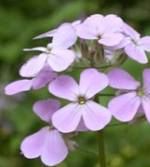 DESCRIPTION: Dame's rocket is a showy, short-lived perennial with large, loose clusters of fragrant white, pink or purple flowers that bloom from May to August on flowering stalks 2-3 feet in height. This member of the mustard family has flowers with four petals. Many seeds are produced in long, narrow fruits. The leaves are oblong, sharply toothed, and alternately arranged. Leaves decrease in size as they ascend the stem. The overwintering rosette is easily identified from fall through spring. This species is often confused with garden phlox (Phlox paniculata)l. Unlike dame's rocket, the phlox species have opposite leaves that are not toothed, and flowers with five petals, not four. 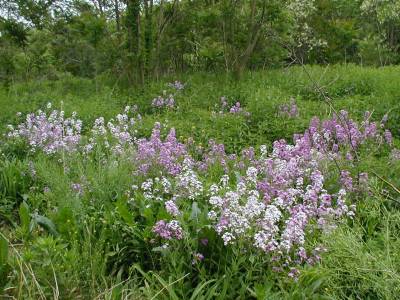 DISTRIBUTION AND HABITAT: Dame's rocket is native to Eurasia but was introduced to North America in the 1600's. This plant usually grows in moist and mesic woodlands, on woodland edges, along roadsides, and also in open areas.

LIFE HISTORY AND EFFECTS OF INVASION: Dame's rocket is planted as an ornamental, but quickly escapes cultivation because of its prolific seed set. Unfortunately, part of its success can be attributed to its wide distribution in "wildflower" seed mixes. It generally produces a basal rosette the first year, flowering the following year. The plants are prolific bloomers and produce large quantities of seed from May into July. Each plant may have several clusters of flowers at various stages of development, enabling the plant to produce both flowers and seeds at the same time. The effects of dame's rocket invasion are not known, but it may compete with native species.

CONTROLLING DAME'S ROCKET
Dame's rocket has not been studied extensively. In fact, it is not yet widely recognized as an invasive plant in the Midwest. Consequently, this plant may not be recognized as a troublesome species until it is well-established as a formidable problem. Locating and removing plants immediately before seed sets is the best way to prevent the spread of dame's rocket. Be sure to check the contents of "wildflower" seed mixes for this species, and do not plant those that carry it. 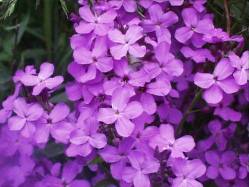 Mechanical Methods: Plants in urban gardens may not pose a problem, but any plant whose seed may escape to roadsides or woodlots should be eradicated or prevented from going to seed by cutting the flower heads after they bloom. Pulling may need to be done for several years to remove new plants established from the seed bank. Pulling or use of a dandelion digger is most effective when the soil is moist is effective. If plants are pulled when in bloom, they should not be placed in compost piles, as the seeds may still ripen and spread. Flower-heads should be bagged for landfill, or dried and burned where permissible. Where there is sufficient leaf litter or other fuel, burning has been found to be an effective control method.

Chemical Methods: Selectively applying a broadleaf herbicide like glyphosate to seedlings according to label recommendations may also be an effective means of control. To avoid damaging adjacent native vegetation, apply herbicide in late fall when the rosettes are still green.