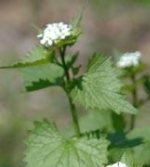 Description: Garlic mustard is a cool-season biennial herb that ranges from 12 to 48 inches in height as an adult flowering plant. Leaves and stems emit the distinctive odor of onion or garlic when crushed (particularly in spring and early summer), and help distinguish the plant from all other woodland mustard plants. 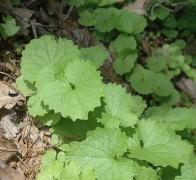 Click ImageFirst year plants consist of a cluster of 3 or 4 round, scallop edged leaves rising 2 to 4 inches in a rosette. Second-year plants generally produce one or two flowering stems with numerous white flowers that have four separate petals. Garlic mustard is the only plant of this height in our woods with white flowers in May. Fruits are slender capsules 1 to 2.5 inches long that produce a single row of oblong black seeds with ridged seed coats. Stem leaves are alternate and triangular in shape, have large teeth, and can be 2 to 3 inches across in fruiting plants. Petioles are longer on the leaves towards the base. Garlic mustard can also be distinguished by its uproot, which is slender, white, and "s"-shaped at the top of the root.

Garlic mustard is an exotic species introduced from Europe presumably by early settlers for its supposed medicinal properties and for use in cooking. It is widely distributed throughout the northeastern and Midwestern U.S. from Canada to South Carolina and west to Kansas, North Dakota, and as far as Colorado and Utah. In Wisconsin, the plant is currently concentrated in the southeastern and northeastern counties, although distribution records indicate its presence is nearly statewide

Garlic mustard grows in upland and floodplain forests, savannas, yards, and along roadsides, occasionally in full sun. It is shade-tolerant, and generally requires some shade; it is not commonly found in sunny habitats. It cannot tolerate acidic soils. The invasion of forests usually begins along the wood's edge, and progresses via streams, campgrounds, and trails.

This species is a biennial that produces hundreds of seeds per plant. The seeds are believed to be dispersed on the fur of large animals such as deer, horses, and squirrels, by flowing water and by human activities. In our areas, seeds lie dormant for 20 months prior to germination, and may remain viable for five years. Seeds germinate in early April. First-year plants appear as basal rosettes in the summer season. First-year plants remain green through the following winter, making it possible to check for the presence of this plant in your woods throughout the year. Garlic mustard begins vegetative growth early in the spring, and blooms in southern Wisconsin from May through early June. Fruits begin to ripen in mid-July, and are disseminated through August. Viable seeds are produced within days of initial flowering.

Garlic Mustard is a rapidly spreading woodland weed that is displacing native woodland wildflowers in Wisconsin. It dominates the forest floor and can displace most native herbaceous species within ten years. This plant is a major threat to the survival of Wisconsin's woodland herbaceous flora and the wildlife that depend on it. There are two modes of spread: an advancing front, and satellite population expansion possibly facilitated by small animals. Unlike other plants that invade disturbed habitats, garlic mustard readily spreads into high quality forests.

Hit it early and hit it hard. As soon as you see plants, start treating them before the understory of the woods is carpeted with garlic mustard. Don't give up hope when garlic mustard comes back for several years; the plants create thousands of seeds that can remain viable in the soil for a number of years.

You can tackle small areas of garlic mustard by pulling second-year plants by hand. The best time to pull plants is when they have just started flowering, but before any seeds have been made. This is a good rainy-day project because you have a better chance of pulling up the entire root system so that the plant doesn't resprout from the part of the root that you left behind. Get rid of the flowing plants by bagging them and sending them to a landfill with the bag labeled "Invasive plants. Approved by DNR for landfilling." (And think about using a paper bag rather than a plastic bag; that plastic bag is going to last in the landfill a long time.) Don't compost garlic mustard because those seeds will come back to haunt you when you use the compost in your garden!

Large infestations are best controlled by spraying with a herbicide with the active ingredient glyphosate, which comes under many brand names, such as Roundup or Cornerstone. Because garlic mustard begins growth early in the spring, before native flowering plants are growing, spraying at this time should not cause too much if any damage. Glyphosate should be used at a concentration of 1-2% active ingredient. Read the label to determine the active ingredient concentration and dilute in water accordingly. Spray so that all leaves become wet. A backpack sprayer works best. Glyphosate is quickly inactivated by soil and has no residual effect, so it is important that each leaf gets sprayed. First year plants can also be sprayed in the late fall, after frosts have knocked back all native plants. Garlic mustard plants will still be green and growing, and can be killed at this time without affecting native vegetation.