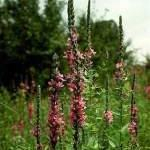 Purple loosestrife is a perennial herb 3-7 feet tall with a dense bushy growth of 1-50 stems. The stems, which range from green to purple, die back each year. Showy flowers vary from purple to magenta, possess 5-6 petals aggregated into numerous long spikes, and bloom from July to September. Leaves are opposite, nearly linear, and attached to four-sided stems without stalks. It has a large, woody taproot with fibrous rhizomes that form a dense mat.

This species may be confused with the native wing-angled loosestrife (exit DNR) (Lythrum alatum) found in moist prairies or wet meadows. The latter has a winged, square stem and solitary paired flowers in the leaf axils. It is generally a smaller plant than the Eurasian loosestrife.

By law, purple loosestrife is a nuisance species in Wisconsin. It is illegal to sell, distribute, or cultivate the plants or seeds, including any of its cultivars.

Purple loosestrife is a wetland herb that was introduced as a garden perennial from Europe during the 1800's. It is still promoted by some horticulturists for its beauty as a landscape plant, and by beekeepers for its nectar-producing capability. Currently, about 24 states have laws prohibiting its importation or distribution because of its aggressively invasive characteristics. It has since extended its range to include most temperate parts of the United States and Canada. The plant's reproductive success across North America can be attributed to its wide tolerance of physical and chemical conditions characteristic of disturbed habitats, and its ability to reproduce prolifically by both seed dispersal and vegetative propagation. The absence of natural predators, like European species of herbivorous beetles that feed on the plant's roots and leaves, also contributes to its proliferation in North America.

Purple loosestrife was first detected in Wisconsin in the early 1930's, but remained uncommon until the 1970's. It is now widely dispersed in the state, and has been recorded in 70 of Wisconsin's 72 counties. Low densities in most areas of the state suggest that the plant is still in the pioneering stage of establishment. Areas of heaviest infestation are sections of the Wisconsin River, the extreme southeastern part of the state, and the Wolf and Fox River drainage systems.

This plant's optimal habitat includes marshes, stream margins, alluvial flood plains, sedge meadows, and wet prairies. It is tolerant of moist soil and shallow water sites such as pastures and meadows, although established plants can tolerate drier conditions. Purple loosestrife has also been planted in lawns and gardens, which is often how it has been introduced to many of our wetlands, lakes, and rivers.

Purple loosestrife can germinate successfully on substrates with a wide range of pH. Optimum substrates for growth are moist soils of neutral to slightly acidic pH, but it can exist in a wide range of soil types. Most seedling establishment occurs in late spring and early summer when temperatures are high.

Purple loosestrife spreads mainly by seed, but it can also spread vegetatively from root or stem segments. A single stalk can produce from 100,000 to 300,000 seeds per year. Seed survival is up to 60-70%, resulting in an extensive seed bank. Mature plants with up to 50 shoots grow over 2 meters high and produce more than two million seeds a year. Germination is restricted to open, wet soils and requires high temperatures, but seeds remain viable in the soil for many years. Even seeds submerged in water can live for approximately 20 months. Most of the seeds fall near the parent plant, but water, animals, boats, and humans can transport the seeds long distances. Vegetative spread through local perturbation is also characteristic of loosestrife; clipped, trampled, or buried stems of established plants may produce shoots and roots. Plants may be quite large and several years old before they begin flowering. It is often very difficult to locate non-flowering plants, so monitoring for new invasions should be done at the beginning of the flowering period in mid-summer.

Any sunny or partly shaded wetland is susceptible to purple loosestrife invasion. Vegetative disturbances such as water drawdown or exposed soil accelerate the process by providing ideal conditions for seed germination. Invasion usually begins with a few pioneering plants that build up a large seed bank in the soil for several years. When the right disturbance occurs, loosestrife can spread rapidly, eventually taking over the entire wetland. The plant can also make morphological adjustments to accommodate changes in the immediate environment; for example, a decrease in light level will trigger a change in leaf morphology. The plant's ability to adjust to a wide range of environmental conditions gives it a competitive advantage; coupled with its reproductive strategy, purple loosestrife tends to create monotypic stands that reduce biotic diversity.