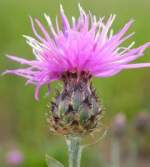 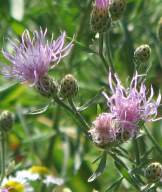 Click ImageDESCRIPTION: Spotted knapweed is a short-lived perennial forb of the Asteraceae family. It commonly grows to 3-4 feet in height. The basal leaves are deeply lobed and arranged in a rosette. Stem leaves are arranged alternately and are not lobed. The upper stem leaves are bract-like. Stems are paniculate branched, polycarpic, and erect. The majority of stem growth occurs in June. The slender, hairy stems grow in an erect and branched arrangement. Single thistle-like, pinkish-purple flower heads reach 3/4 inch in diameter and occur at the tips of terminal or axillary stems from late June through August. Each flower head has stiff bracts marked with fine, vertical streaks and tipped with dark, comb-like fringes that give the flower head a spotted appearance. Seeds are brownish in color, under 1/4 inch in length, notched on one side of the base, and have a short tuft of bristles at the tip, enabling wind dispersal. Knapweed has a stout, elongated taproot.
Species similar to spotted knapweed include the following:

DISTRIBUTION AND HABITAT: This plant was probably introduced in the 1890's as a contaminant in alfalfa or hay seed from Europe and Asia. Spotted knapweed has become a serious problem in the rangelands of the northwest United States. In recent years, the species has invaded relatively undisturbed natural areas in Wisconsin as well as heavily disturbed sites. The extent of the invasion and the communities potentially affected are not well known. Until recently, spotted knapweed was presumed to inhabit only heavily disturbed areas such as road ditches, agricultural field mrailroad beds, pipelines, and recently installed utility lines; the plant has now been found in dry prairie sites, oak and pine barrens, and on lake dunes and sandy ridges. It seems to bespecially problematic in the central sands, northern Wisconsin, and near the Great Lakes.

LIFE HISTORY AND EFFECTS OF INVASION: Spotted knapweed reproduces solely by seed. Individual flower heads bloom from late June through August for 2-6 days each. The bracts reopen after about 20 days and scatter seeds. Plants average about 1,000 seeds per plant. Seeds are viable for seven years, and germinate throughout the growing season. Seedlings emerging in fall develop into a rosette of leaves that resume growth in spring.
Spotted knapweed often attains high densities on sunny wild lands--even ones undisturbed by human or livestock activity. Knapweed tends to dominate sites at the expense of community diversity or forage production. Knapweed infestation can also increase surface run-off and sedimentation.