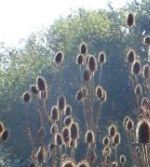 Click ImageDescription: Teasels are monocarpic perennials. The plant grows as a basal rosette for a minimum of one year, then sends up a tall, flowering stalk and dies after flowering. The rosette stage varies according to the amount of time needed to acquire enough resources for flowering to occur.

During the rosette stage, leaves change from being somewhat ovoid in the younger stage to large, oblong, and quite hairy in the older stage. During the rosette phase, teasel develops a large taproot. The taproot may be over 2 feet in length and 1 inch in diameter at the crown.

Cut-leaved teasel blooms from July through September; common teasel blooms from June through October. Flowering plants have large, oblong, opposite, sessile leaves that form cups (the cups may hold water) and are prickly, especially on the lower midrib. The leaves of cut-leaved teasel are broader and have feathering lobes. Stems are also prickly. Teasel's unique inflorescence makes the plant readily identifiable when flowers or seedheads are present. Flowers are small and packed in dense, oval-shaped heads. The flowers are subtended by stiff, spiny bracts that are located terminally on the flowering stems. Cut-leaved teasel usually has white flowers, while common teasel generally has purple flowers. Flowering stems may reach 6-7 feet in height. The two species may hybridize.

DISTRIBUTION AND HABITAT: The common and cut-leaved teasels are European plants introduced to North America in the 1700's. Teasel is currently used in horticultural plantings and dried flower arrangements.

Teasel grows in open, sunny habitats that range from wet to dry levels. Optimal conditions seem to be mesic habitats. Roadsides and heavily disturbed areas are the most common habitats of teasel. Teasel sometimes occurs in high quality prairies, savannas, seeps, and sedge meadows. Both species have become severe threats to northern Illinois natural areas. Rapid expansion of the range of cut-leaved teasel has been observed in several midwestern states, including southern and western Wisconsin.

LIFE HISTORY AND EFFECTS OF INVASION: The teasel population has rapidly expanded in the last 30 years. Movement has been documented along highway systems, where dispersal is aided by mowing equipment. Teasel is an aggressive exotic that forms extensive monocultures.

Teasel produces an abundance of seeds. A single teasel plant can produce over 2,000 seeds; up to 30-80% of the seeds may germinate. Seeds may remain viable for at least 2 years. Seeds typically don't disperse far; most seedlings will be located near the parent plant. However, highway mowing equipment and inappropriate disposal of dried teasel heads from flower arrangements can increase the spread. Dead adult plants leave a relatively large area of bare ground formerly occupied by their own basal leaves, providing an optimal nursery site that new plants readily occupy. Seeds may be water-dispersed, which allows dispersal over longer distances. Immature seedheads of cut-leaved teasel are capable of producing viable seed.