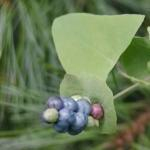 Mile-a-minute is an herbaceous, annual, trailing vine in the Buckwheat family. The one to three inch leaves are alternate, light green, shaped like an equilateral triangle, and have barbs on the underside. The delicate, narrow, reddish stems can grow to 20 feet, have curved downward pointing barbs and are surrounded at intervals by circular, cup shaped leafy structures, known as ocreas. Small, inconspicuous white flowers, and segmented, metallic blue fruits emerge from within the ocreas.

The equilateral triangle shape of the leaves and the blue, berry-like fruits help to distinguish this plant from several similar vines including the native tear-thumbs.

Native to Eastern Asia, this weed is now widespread in the Mid-Atlantic States to Ohio, Oregon and Mississippi. The barbed stem and rapid rate of growth (up to six inches a day) allows this plant to climb over natives, reducing their access to sunlight and their ability to photosynthesize. Seeds of mile-a-minute are dispersed by birds, ants, small mammals, and by water, remaining buoyant for 7-9 days. Mile-a-minute generally colonizes open or disturbed areas such as edges of woods, streams, and roads. It prefers wet soils and requires much light.

Prior to seed development these vines can be removed by hand, if thick gloves and heavy clothes are worn. Balled-up vines should be left to dehydrate for several days before disposal. Repeated mowing and trimming can prevent flowering and seed production. Applications of herbicides containing glyphosate and clopyralid have also been effective. Sufficient cover of native vegetation may help prevent mile-a-minute from establishing a colony.