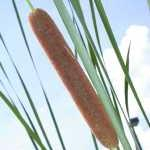 DESCRIPTION: The velvety, brown flower head and long, graceful, lanceolate leaves of the cattail are a common site throughout Wisconsin wetlands. The flower head, shaped like an elongate cylinder, is a compact spike at the terminal end of a stem 1-3 meters tall. The flower spike is divided into two readily distinguishable parts: pistillate flowers form the conspicuous brown club located below the yellow spire of staminate flowers. The leaves originate at the base of the stem and spread outward as they rise into the air. Below ground, starchy rhizomes anchor the plant to the soil. If the plants are growing in a colony, their rhizomes may become intertwined and form a dense mat.

Of the two species of cattail that exist in Wisconsin, common cattail is taller and generally more robust than the narrow-leaved variety. Observation of the flower spike also helps distinguish the two species. The pistillate and staminate flowers of the common cattail emerge in direct contact with one another, with no gap separating the male and female flower parts; on the flower spike of the narrow-leaved cattail, the pistillate and staminate flowers are separated by a gap 2-10 centimeters in length.

DISTRIBUTION AND HABITAT: The common cattail is a native, opportunistic North American wetland species. The narrow-leaved cattail is possibly an exotic or hybrid.

Cattails can be found in damp soil or shallow water where sufficient nutrients are available. It is a common site along expressways, in artificial ditches and shallow ponds, at the edges of calm waters, in consistently damp patches of rural and suburban yards, and in freshwater marshes. This prolific plant plays an important role as a source of food and shelter for different marsh-dwelling animals, especially when cattails form large stands on relatively open, wet soils abutted by water.

LIFE HISTORY AND EFFECTS OF INVASION: Cattails reproduce sexually by seed and vegetatively by the production of rhizomes. The flower head of the parent plant can produce 250,000 seeds, which are then wind-dispersed. Seeds remain viable in the seed bank for up to 100 years. Cattail seeds prefer freshwater, and will not germinate unless saturated in at least 0.5-1 inch of water. Sunlight affects germination rates; seeds will remain quiescent if the area does not receive the proper amount of sunlight.

Cattails also reproduce asexually by rhizomes. During the first summer of vegetative propagation, rhizomes grow about two feet in length. New shoots emerge at the rhizome around mid-summer. Cattails can quickly dominate a wetland plant community and produce monotypic stands that reduce the overall habitat value.

CONTROLLING CATTAILS:
The acreage of cattail-dominated wetlands in the United States has increased drastically since the early twentieth century due to changes in hydrology and land use. The optimal control technique for a given site will depend on the hydrologic state of the site, the size of the area to be managed, and if the manager is able to manipulate water levels.

Mechanical Control:
Water Level: The control of cattails by the manipulation of water level must be timed to the annual cycle of carbohydrate storage. Special leaf and stem cells called aerenchyma provide air passage from both living and dead leaves to the rhizomes. Removing dead leaves and submerging the shoots in early spring will strain the plant and eventually kill it. The depth of water necessary to kill the plants depends on temperature, the quantity of starch the plant stored the previous year, and the general vigor of the plants. Therefore, no minimum water depth can be prescribed, but, generally, a water level maintained at 3-4 feet above the tops of existing spring shoots will retard growth. It is critical to remember that even if dead leaves from the previous year are completely removed, aerobic conditions will be restored to the rhizome as soon as the new growing shoot penetrates the water surface. Even if water levels are sustained at only a few inches above the tops of the growing shoots, oxygen is prevented from reaching the rhizomes. The use of water is most efficient if the water level is raised progressively, so that all plant parts remain submerged by no more than a few inches. Water levels in the range of four to five feet also favor the wintertime survival of muskrats in flooded areas. Population levels of ten muskrats per acre, when combined with high springtime water levels, can nearly eliminate the emergence of cattails within a span of two years.

Cutting, Crushing, Shearing, and Discing: Starch reserves in the rhizomes are at their minimum in late spring when the pistillate spike of the cattail is lime green and the staminate spike is dark green. This is the best time to employ cutting, crushing, shearing, and/or discing to eliminate cattail colonies because all these methods impede starch storage during the growing season. The methods of control work best if employed during a three-week time window beginning one week before and ending one week after the staminate spike has emerged.

Deep discing can retard shoot formation and damage the rhizomes, but should be used in combination with water-level control and the prevention of seed establishment to effectively hinder the re-emergence of cattails. Discing combined with continued drying and freezing in fall decreases plant survival; if a wetland can be kept dry enough to repetitively disk for 2-3 successive seasons, cattails can be eliminated or their stem densities severely reduced. However, discing has some major drawbacks: the equipment and personnel needed to carry out this method of control are costly, and will seriously disturb the site. This will likely result in the loss of other native plants in the area as well.

Cutting, crushing, shearing, or discing severs the aerenchyma link that provides oxygen between the rhizomes and leaves of cattails during dormancy. These techniques must be combined with high springtime water levels in order to effectively retard plant growth. Cattails can be cut with a rotary mower or sheared with a front-end loader on a tractor when equipment can be driven on ice, but airborne seeds may clog equipment. High water levels must be maintained throughout the spring and early summer.

Bulldozer: Bulldozers can effectively remove plants from a marsh, but will generally drastically disturb the wetland. Permits must be obtained before clearing a marsh with heavy equipment. A bulldozer or or other machinery is the only viable method that will remove floating cattail mats, but these removal methods are also costly, and effects may be short-lived. If the seed bank of the marsh is dominated by cattails, a new colony of the hardy plants may spring up after the next drawdown of the marsh; other undesirable plants could also take the place of the cattails in the marsh.

Grazing: Grazing by cows, geese, muskrats, and other animals can be an effective method of cattail management. Grazing on seedlings and young cattails without extensive rhizomes can reduce the stem density of the colony. For mature plants, grazing combined with water-level management reduces survival rates. To maximize the impact of grazing, it should be heaviest during the three-week window of time when the flower spikes are emerging.

Prescribed Burning: Most cattail marshes must be burned in winter or before significant growth has occurred in spring; these are generally the only times when fuels are dry enough to carry a fire, although frozen ground or saturated soil may impede the fire's progress through the cattail duff. Fire is most effective as a control method when followed by naturally or artificially high water levels in the spring to smother residual stalks.

During times of drought, cattail stands overlying well-developed peat soils can be eliminated by burning. Because such fires burn peat, the ability to smother the fire by reflooding the marsh must exist before a prescribed burn can be implemented. Peat fires can also cause undesirable changes in the marsh environment, such as destruction of the seed bank, loss of peat, and air pollution.

Chemical Control: Application in mid to late summer enhances the effectiveness of translocated herbicides, although the herbicides will have little effect on seed production during the year of application. A hemi-marsh may be created if some cattails survive, although the ability of the marsh to persist in this condition depends on the manipulation of water levels. Water level control to minimize recruitment from the seed bank must be used to ensure cattails will not return once reduced by herbicides.

Herbicides can be detrimental to wetlands habitats--be sure to use herbicides that readily break down in water, soil, or substrate, such as glyphosate formulated for use over water. Boom or wick applications by ground or air boat are best for small areas where pesticide drift is a concern. Aerial applications may be used on large areas. Herbicidal control of cattails may be costly, although actual application of the herbicide usually represents a small fraction of this cost. One area manager found that an aerial application of glyphosate during August was effective in controlling cattails, dogwood, and willow, but quite costly at $110/acre. Due to the possibility of fish contamination, notice must be posted before spraying, and can be done only by a person licensed to apply herbicides.