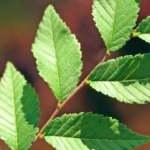 DESCRIPTION: This small to medium-sized tree has an open, round crown of slender, spreading branches. Siberian Elm generally reaches 50-70 feet. Its bark is gray or brown, with shallow furrows at maturity. Both the buds and twigs are nearly hairless. This elm is distinguished by its small, elliptical, smooth, singly-toothed leaves, that reach lengths of approximately 0.8-2.6 inches. They are tapering or rounded at their asymmetrical base. The alternate leaves are dark green and smooth above, paler and nearly hairless beneath. Foliage is slightly pubescent when young. Flowers are greenish, lack petals, and occur in small drooping clusters of 2-5 blossoms. The winged fruit has one seed that is circular or ovate with a smooth surface. Fruit are about 1/2 inch wide and hang in clusters.

Siberian elm can be distinguished from the native American elm and slippery elm by the following characteristics: Siberian elm has relatively small leaves (rarely more then 2 inches) that are symmetrical (or nearly so) and are once-serrate; both American and slippery elm have leaves typically over 2.8 inches long that are strongly asymmetrical at the base and are usually twice-serrate. Chinese elm (Ulmus parviflora) is exotic but not as invasive. Chinese elm flowers in late summer or fall. The apex and teeth of the leaves are less sharply acute than U. pumila.

DISTRIBUTION AND HABITAT: Siberian elm is a fast-growing tree that was introduced to the United States in the 1860's. Native to northern China, eastern Siberia, Manchuria, and Korea, it is the hardiest of all elms and does well even in areas with cold winters and long periods of summer droughts. Because this elm tolerates a variety of conditions such as poor soils and low moisture, it is found in dry regions, along roadsides, and in pastures and grasslands. The tree also grows in moist soils along streams. It invades dry and mesic prairies, including sand prairies. It is now established from Minnesota south to Arkansas and west to Utah.

LIFE HISTORY AND EFFECTS OF INVASION: This tree flowers in spring before leaves begin to unfold. The fruits develop quickly and are disseminated by wind, allowing the species to form thickets of hundreds of seedlings in bare ground. Seeds germinate readily and seedlings grow rapidly.

CONTROLLING SIBERIAN ELM
Mechanical Control: Girdling trees is the preferred management technique. Girdled trees die slowly over the course of one to two years and do not resprout. Girdle in late spring to mid-summer when sap is flowing and the bark easily peels away from the sapwood. When girdling, the bark must be removed in a band around the tree trunk just to the outside of the wood. If girdled too deeply, the tree will respond by resprouting from the roots. If resprouting should occur, the resprouts should be cut.

Seedlings can be pulled out by hand, and small trees can be removed carefully with a grub hoe or weed wrench. Wind-dispersed elm seeds from nearby areas are often a greater threat than resprouting of established elms. Managers should eliminate nearby Siberian elms whenever possible.

A regular fire regime should control Siberian elm in fire-adapted communities, although saplings older than a few years may not be killed by fire, and instead will require another control method, such as girdling.

Chemical Control: Glyphosate may be used as a cut-stem application for large trees and resprouts. A 10-20% active ingredient concentration has proven to be effective, and should be applied in the fall or winter. If herbicide is used, care should be taken to prevent contact with nontarget species.