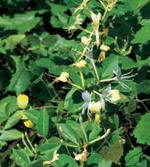 Plant Habit. Trailing or climbing vine that forms arbors in forest canopies and dense, sprawling mats on the ground. Vines typically are 6-10 feet long, sometimes up to 30 feet.

Stems. Young stems are reddish to light brown, covered with fine soft hairs. Older stems become tan and fissured, and bark may peel or shred with age. Stems are hollow and woody, and can be up to 2 inches thick.

Leaves. In pairs along stem, oval to oblong, 1 1/2 - 3 1/2 inches long with variable margins (mostly smooth, sometimes lobed). Base is rounded, attached to a short stalk. Tips are round to blunt-pointed. Leaves can be nearly smooth to densely hairy. Top surface is green whereas the underside can appear whitish-green.

Flowers. Blossoms are large, showy and sweet-smelling, colored white, yellow, cream or pinkish, yellowing with age. They are tubular with reflexed lips; 4 fused petals form the upper lip and a single petal forms the lower. Borne in pairs at the leaf axils. Blooms April to June. Flowers open at dusk to allow pollination by diurnal bees and nocturnal moths. Plants rarely bloom in low light.

Fruits/Seeds. Small, round, 1/4 inch fruits appear singly or in pairs in leaf axils. They are purple-black when ripe and contain 2-3 seeds.

Reproduction. Seeds are dispersed over long distances by birds. Sprawling vines also can root where they contact the soil, and underground stems (rhizomes) send up new shoots.

Japanese honeysuckle is a woody vine that can overwhelm native flora in forests and other habitats. It is an exceptional competitor due to its potential for widespread seed dispersal, rapid growth rate, extended growing season, broad habitat tolerance and ability to monopolize resources above and below ground. It twines around and over other plants forming dense, tangled thickets under which few plants can survive. Stems wrap tightly around woody plants and can girdle them over time. Native species -- when forced to compete with Japanese honeysuckle -- have lower leaf nitrogen, decreased photosynthesis and stunted growth. Evidence suggests that this species is allelopathic, meaning it releases chemicals that inhibit the growth of neighboring plants.

On Forestry: Twining vines create dense tangled canopies and mats that compete with native vegetation. The weight of the dense vines can cause trees and shrubs to topple over. It threatens tree regeneration because it can smother seedlings and saplings. Japanese honeysuckle plants can germinate under low light conditions and persist in a suppressed state until the forest canopy opens up from natural disturbance or logging, after which they are "released" to expand rapidly. Evidence suggests allelopathic interference with regeneration of loblolly and shortleaf pine.

On Foresters: Tangled vines may hinder access to the forest and interfere with forestry operations such as reconnaisance. Safety of sawyers felling trees is compromised as trees fall in unpredictable directions due to constraining vines. On-the-ground processing of logs and slash is further inhibited by entangling Japanese honeysuckle.

Mechanical: For light infestations and seedlings, vines can be pulled or dug out by the roots and removed from the area. It is preferable to do this before the vines have fruited. Fruiting vines should be bagged and landfilled. Cutting the vines without removing the roots or chemically treating the stems will stimulate vigorous regrowth. Soil disturbance will invite germination of seeds in seedbank, thus follow-up scouting and treatment of seedlings may be necessary for a number of years.

Prescribed burns in fire-adapted communities will reduce biomass of dense ground mats and climbing vines, creating optimal conditions for effective follow-up foliar spray with glyphosate (see below). Fire may kill seedlings, but will only temporarily set back older plants.

Chemical: Glyphosate (1.5-2.0% active ingredient) can be applied to foliage from spring through fall. It is most effective after the first killing frost but before the first hard frost in fall. Fall treatment is recommended because non-target plants will be dormant. Monitor treated plants into the second growing season, as plants are known to recover.

The combination method of treating cut stems with herbicides may be unreliable due to the fact that vines often develop roots where they come in contact with the soil. In situations where plants grow off the ground, cut vines just above soil surface and treat stems immediately with glyphosate (20% active ingredient).

NOTICE: Use pesticides wisely. Always read the product label carefully. Follow all mixing and application instructions and wear all recommended protective gear and clothing. Contact your state department of agriculture for any pesticide use requirements, restrictions or recommendations. Many states require individuals involved in the commercial application of pesticides be certified and licensed.

Native to Japan and eastern Asia, Japanese honeysuckle was introduced in the early to mid-1800s for its ornamental and soil stabilizing values. It was also planted by wildlife managers as winter forage for deer. Medicinally, the plant is believed to have anti-inflammatory, anti-bacterial and antiviral properties. The genus Lonicera is named after Adam Lonicer, a 16th century German herbalist, and japonica means of Japan.