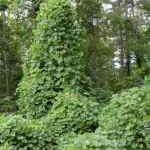 Kudzu is a perennial, deciduous semi-woody climbing vine in the pea family. The stems are yellowish green and have golden and silver hairs. The leaves are alternate and compound, and have three broad, pointed, usually slightly lobed leaflets with golden hairs. The flowers are purple with a yellow middle, and appear in long, slender clusters from June to September. Flat, brown, golden-haired pods form in clusters and hold 3-10 seeds. The tuberous roots can reach 12 feet and weigh up to 400 pounds.

Kudzu is widespread in the southern states, with reproducing populations having been found as far north as Chicago. It appears in forest edges, abandoned fields, roadsides, and disturbed areas. It prefers most soil types, 40 inches or more of rain per year, abundant sunlight, hot summers, and mild winters. Kudzu can grow up to a foot per day and 60 feet per season, and can produce up to 30 vines from a single root crown. It quickly girdles and blankets shrubs and trees, breaking branches and uprooting entire trees under its weight. It reproduces via runners, rhizomes, vines that root at the nodes, and hard-coated seeds dispersed by wind, water, and animals. Only one or two seeds per pod cluster are viable, and they may lie dormant for several years.

Small infestations can be mowed closely every month or cultivated repeatedly for two growing seasons. Repeatedly cutting the stems near the ground each spring and summer will exhaust the carbohydrate reserves. Cutting and treating the stems with a systemic herbicide late in the season will kill the roots. Cuttings should be burned, bagged and disposed of in a landfill, or fed to livestock. Large infestations may need to be treated repeatedly with foliar herbicides. Spray the vines as high as possible, and cut those that survive.