Save the date: SEWISC Annual Symposium

Celebrate our recent accomplishments, meet our new 2012 Sweat Equity Awardee and learn about our plans for 2013.  This year’s guest speakers will discuss the economic impacts of invasive plant and animal species.  The symposium is free and open to the public.

Contact: mailto: to become a Symposium sponsor and/or to display at this event! 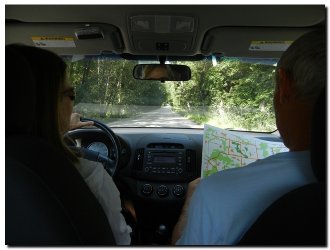 Maps and data forms are pouring in from more than 150 volunteers who participated in SEWISC’s second roadside survey.  Citizen scientists collected location and population size data for wild parsnip (Pastinaca sativa) and also fine-tuned the 2011 reports for common and cut-leaved teasel (Dipsacus sylvestris and D. laciniatus), common reed grass (Phragmites australis) and Japanese knotweed (Polygonum cuspidatum).  The survey was among 18 projects selected for assistance through the Wisconsin Department of Natural Resources 2012-13 Citizen-based Monitoring Partnership Program.  Additional funding for survey coordination was provided by the US Forest Service.

The survey data is currently used to plan and implement control efforts.  For example, five teasel populations were treated in August by volunteer surveyors Lee and Mary Krueger in Washington County.  Milwaukee County Parks Department staff has controlled populations that were mapped by SEWISC volunteers in 2011 including 92.3 acres of teasel and 15 acres of Japanese knotweed.  A treatment plan for common reed grass has been developed by Milwaukee County staff and will begin later this year.  The Ozaukee County Land & Water Management and Highway Departments are working with SEWISC to continue controlling teasel and wild parsnip (initiated in 2011), as well as formulating plans to continue this work along all the roadways managed by the county.  The City of Mequon Public Works Department is also working with SEWISC to develop a plan to control invasive plant population throughout southern Ozaukee County.

Management of common reed grass throughout southeastern Wisconsin will begin yet this year. Populations mapped by our survey volunteers will be selected and treated as part of our new STRIKE Team program.

Beginning this fall, SEWISC will work with partners to reestablish rare oak-savanna plant communities, ultimately benefitting wildlife which depend on that habitat.  With funding from the James E. Dutton Foundation, Inc., the Milwaukee County Department of Parks, Recreation and Culture and the Waukesha County Land Conservancy, we will tackle two high priority invasive plant infestations located in the Franklin Savanna State Natural Area and in the Eagle Centre Prairie State Natural Area/Oak Savanna Restoration.  These efforts will result in long-term benefits to local wildlife as well as increase local environmental stewardship activities.

Oak savanna, which once was found in the prairie-forest ecotone that included large parts of southern and western Wisconsin, is now perhaps the most threatened and rare vegetation community in the state. Savannas once covered over 5 million acres in southern Wisconsin. As the oak savanna disappeared so did the species of wildlife that use this unique habitat type. Savannas are diverse ecosystems that provide critical habitat to "species of greatest conservation need" (SCGN) as defined by Wisconsin's Wildlife Action Plan. Avian species that can directly benefit from our restoration efforts include Brown Thrasher, Field Sparrow, Red-headed Woodpecker, Blue-winged Warbler, and Black-billed Cuckoo. Other savannah/savannah-edge species not on the list of SGCN that may benefit include American Kestrel, Northern Flicker, Orchard Oriole, Northern Shrike, Common Yellowthroat, and Clay-colored Sparrow.

Located in the city of Franklin, the Franklin Savanna State Natural Area (part of the Milwaukee County Park System) is a rare, 92 acre oak savanna and is Milwaukee County’s last remaining savanna remnant.  A heavy invasion of common buckthorn and smaller pockets of invading garlic mustard, reed canary grass, and oriental bittersweet threaten the health of this site.  Non-native invasive species are out-competing the native grassland plants, causing reduced habitat for many native wildlife species.  The ephemeral wetlands on site are choked with reed canary grass which limits breeding sites for amphibians, one of the building blocks of any healthy ecosystem.

The Eagle Centre Prairie State Natural Area and Oak Savanna property is nestled within both the Village and the Town of Eagle.  A 2010 tornado damaged many 100 to 150 year-old oak trees, leaving open canopy and bare soil areas which have been invaded by buckthorn, honeysuckle, spotted knapweed and sweet clover.  Partially located within the Kettle Moraine Primary Environmental Corridor, the community contains 85 native plant species, of which 60 are native prairie/oak savanna species.  Of particular interest is the significant presence of kittentail (Besseya bullii), which is a state-threatened plant species.

Our invasive species control efforts will be monitored on an annual basis for four years and at five year intervals thereafter.  Measures will be taken as needed for at least 10-12 years to further control buckthorn, honeysuckle and other invasive species as they appear.  Locally collected seeds of native grasses and wildflowers will be introduced to the project areas until a good ground cover is obtained and prescribed burns will be used to maintain the savanna habitat.  Breeding bird surveys will be conducted annually for five years and at five-year intervals thereafter to document wildlife use.  This long-term management plan will be implemented by volunteer and professional land stewards, demonstrating the efficacy of linking education, outreach and on-the-ground restoration.

Unfortunately, this year’s beetle supply was not large enough to supply every purple loosestrife population in the SEWISC region, but Anna hopes to return next year and release beetles in additional sites including those identified this year within Washington and Racine Counties. Report southeast Wisconsin purple loosestrife infestations at:

For the past three years, SEWISC has coordinated field-based internships for area youth.  This summer, four students from the University of Wisconsin-Milwaukee Geography Department took advantage of our program; experiencing an array of tasks focused on native restoration and non-native invasive species mapping, prevention and control. 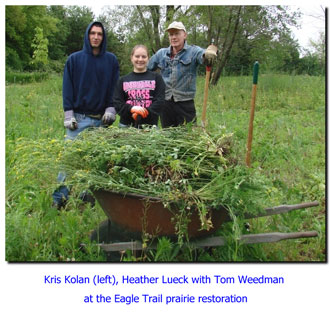 Heather Lueck and Kris Kolan worked with SEWISC Board member and Nature Conservancy Land Steward, Jerry Ziegler, on a wide range of activities throughout seven of the Conservancy’s preserves in Southeast Wisconsin.  Heather and Kris pulled enormous amounts of sweet clover and garlic mustard and also had the opportunity to work with Dr. Tim Gerber, UW-La Crosse, to remove Eurasian water-milfoil at Lulu Lake Preserve in Walworth County.  The students also mowed a steep erosion control slope to stimulate the growth of native plants, and aided with a community trail project linking Eagle Elementary School with the public library in the Town of Eagle in Waukesha County.  Perhaps the dirtiest job assigned to the interns was the removal of a beaver dam from a road culvert to restore the flow of the Mukwonago River.  Heather and Kris also surveyed the roadways of Sugar Creek for wild parsnip.

Working with Kristin Gies, Director of the Mequon Nature Preserve, Amy Rohan and Michael Averill learned to operate hand-held GPS units, collecting geographic coordinate boundaries of sweet clover and thistle populations.  The students delivered the coordinates to the City of Mequon GIS Coordinator who added the information to the City’s database and created a map which was used to manage the populations.  Amy and Michael also planted vegetation in new biofiltration islands in the Preserve’s parking lot and assisted Kristin with several field trips offered by the Preserve with topics such as plant identification and owl pellet dissection.

Autumn is a good time to effectively control many invasive shrub species.  Glyphosate foliar application of herbicide is most effective in late summer or fall; after blooming, but prior to change in leaf color.  Basal applications can be made any time of the year, but are most effective during the dormant season when leaves are not present. 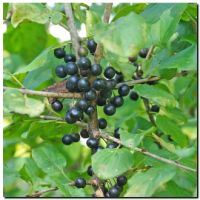 Common or European buckthorn is native to Europe and was brought to Wisconsin as early as 1849 for use as a hedging plant. Due to its long distance dispersal ability (birds eat the berries), prolific seed reproduction, and wide-ranging habitat tolerance, buckthorn is quickly invading woodland understories and prairie edges. Diagnostic characteristics of buckthorn are the prolific black berry clusters, the leaves that stay green well into late fall, a notable false thorn at the end of the twigs, and yellow sapwood-made visible when cut. The bark is gray/brown and exhibits many lenticels (small white spots that function as pores). With large infestations, the female seed-producing plants should be removed first.  Cut-stump treatments with 20-25% Glyphosate mixed with water or 12.5% Triclopyr mixed with bark oil should be applied to the cambium layer and down the side of the cut stump to the root crown.  Cut-stump treatments can be applied anytime but are most effective in fall, and through the winter. Smaller plants can be hand pulled due to a shallow root system. 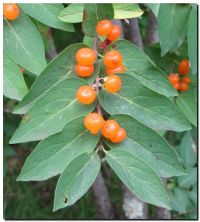 There are multiple species of non-native honeysuckle that are out competing native plants in our natural areas.  Once fully entrenched, non-native honeysuckle will form a dense thicket; creating a heavily shady forest floor that prevents almost anything from growing beneath it. Exotic honeysuckles have opposite, toothless, simple leaves and fragrant, tubular (white, pink, or red) flowers that bloom May-June.  Although, honeysuckle can be treated anytime of the year, fall is an excellent treatment time. As with common buckthorn, a 20-25% Glyphosate mixed with water or 12.5% Triclopyr mixed with a bark penetrating oil applied to the cut stump is the most effective control method.  *Note: non-native honeysuckle is very persistent, and will re-sprout readily if not treated with herbicide.  Smaller plants can be hand pulled due to a shallow root system. 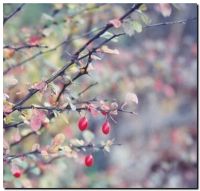 Japanese barberry was introduced as an ornamental from Japan around 1875.  It is a thorny shrub that commonly grows 2-3’ in height and is typically found along woodland edges, roadsides, fences, old fields, and open woods.  Japanese barberry has small leaves found at each thorn axis and red, hanging, oblong berries can be seen fall through winter.  A distinguishing characteristic of Japanese barberry is the bright yellow wood and inner bark found when stripping a branch.  A foliar treatment of 2% Glyphosate or 2% Garlon 3A mixed with water should be applied to the leaves of mature plants and re-sprouts.  If control is performed in a sensitive natural area, a cut-stump method of 12.5% Triclopyr mixed with bark oil should be applied to the cambium layer of the cut stump. 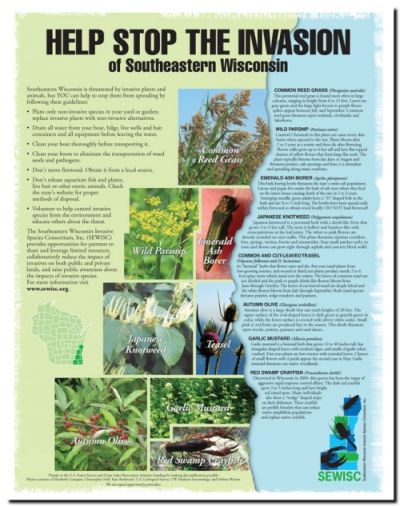 *Save the PDF file once it appears in your browser and send to your favorite print shop.  Designed print size = 22” x 28”

Once you arrive at this website click on the Weed ID Tool on the left column. The database is organized to ask questions about the unknown plant and based on the user’s input, the website will produce a list of plants (scientific and common names) along with thumbnail images that match the information entered.