During the summer, ten students participated in fieldwork internships around Southeastern Wisconsin. Though all of the projects didn't include manually removing invasive species, they were able to help their mentors in more ways than one. 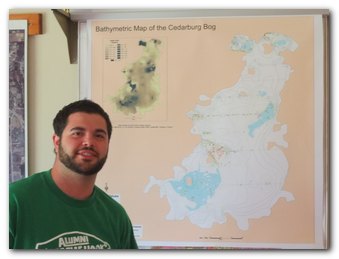 Kevin Korth, UW-Milwaukee graduate studentIntern Kevin Korth is a graduate student in the UW-Milwaukee School of Environmental Geography. His specialty is GIS (Geographic Information Systems) and he came to our internship considerably more experienced in the application of GIS techniques and the visualization of spatial information than his immediate advisor, Dr. Jim Reinartz. Despite his extensive education in GIS this project allowed him to profit greatly from the application of his education to a real-life mapping project. Kevin worked to produce a first-ever topographic (or rather bathymetric) map of the variations in depth within the Cedarburg Bog basin from data that has been collected over decades at the UWM Field Station. The map that Kevin produced is going to be of great value to future research in the Cedarburg Bog Natural Area.

Jerry Ziegler manages seven nature preserves in Southeastern Wisconsin where both Chloe Soik and Brian Cashion worked. Brian worked on various projects including removing invasive species and gathering purple loosestrife beetles to propagate and release. He also placed boundary signs utilizing GPS equipment without the help of previous fence lines in a densely wooded area that was recently acquired. Chloe, on the other hand, was able to focus on a single project. At one of the nature preserves Jerry uses a trap camera to record the people that use the area. This trap camera would take a photo every 12 seconds during the daylight hours leading up to 3,000 to 4,000 photos a day. Chloe was able to develop a speedy way of going through the photos as well as create an excel spreadsheet to better categorize them. 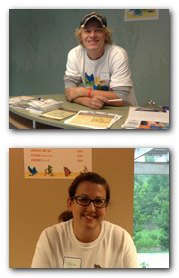 At the Mequon Nature Preserve, Kristin Gies had the help of interns Kate Carney and Joe Nelson. Their project was a continuation of work that other students did last year. They researched and mapped the locations of sweet clover and thistle populations on the preserve and collected an extensive amount of data. They then created a map in ArcGIS using the help of the City of Mequon's GIS Coordinator. Once the map was completed they were able to see the progress of the preserves work on controlling these populations over the years.
Other students placed with mentors this summer include Julee Mitchell and Jeremy Turnmeyer (Schlitz Audubon Internship), Alex Marks and Aron Moberg (Bookworm Gardens Internship) and Michael Denis (Ozaukee County Planning & Parks Internship).

If you are a student who is interested in an internship or a mentor who would like to provide a learning experience, contact our SEWISC Internship Coordinator, Cassie Rincon, at: .