A New Invader to our Region 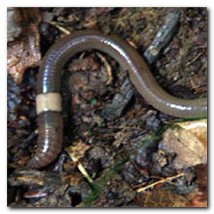 Aptly named, individuals of this worm species jump and thrash when handled, and they behave more like a threatened snake than a worm. They may also shed their tails when caught.  Crazy worms can be 1.5 to 8 inches long. The narrow band around their body (clitellum) is milky white and smooth, unlike other species which have a raised clitellum. Crazy worms reproduce easily. They are asexual (parthenogenetic) and mature in just 60 days, so each year they can have two hatches. The best time to see them is late June and early July. From September until the first hard frost their population will double and may reach damaging levels.  We have received recent reports of these worms in Mequon, Milwaukee and Plymouth.

Crazy worms change the soil, by disrupting the natural decomposition of leaf litter on the forest floor. They turn good soil into grainy, dry worm castings (poop) that cannot support the understory plants of our forests. Other plants, animals and fungi disappear because the understory community can no longer support them.  If you have seen them at your house, in your compost, at a boat landing, or in a forest near you contact: Bernie Williams, WDNR; ; (608) 266-0624.