Congratulations to our Regional Recipients

We are proud to report that Sherry Speth and Paul Mozina were chosen to receive 2015 awards for their dedicated work in southeastern Wisconsin!  The Invader Crusader Awards Ceremony was held on June 5th at Olbrich Botanical Gardens in Madison. 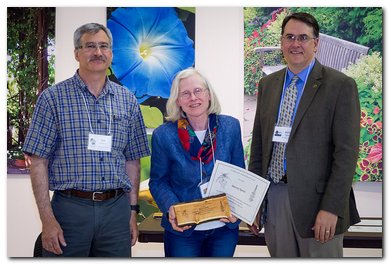 If you need help with species control or education in Sheboygan County, Sherry Speth (middle) is your go-to gal. She is a dedicated volunteer, having committed her time and energy to every aspect of the cause for over ten years. Sherry is a volunteer at Kohler-Andrae State Park. Thanks to her, the park has been able to develop and enhance their gardens and to confront the many invasive plants that are endangering the native vegetation in the park's landscape. Due to her hard work, Sherry was awarded the park's Volunteer of the Year award in 2010. Since then, she has continued her efforts to work on both aquatic and terrestrial invasive species both in the park and on other public and private lands.  Sherry received the SEWISC Sweat Equity Award in 2012 and is a valued SEWISC volunteer who devoted many hours to our 3-year roadside invasive plant survey. 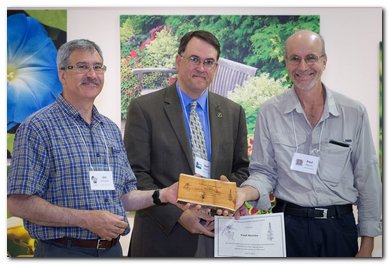 Paul Mozina (on right) has been involved in invasive species outreach and control since 1996. He is currently a volunteer at the Kettle Moraine State Forest’s Southern Unit. Paul is leading an effort to restore about 137 acres of land surrounding the Scuppernong Springs Nature Trail by removing all invasive plant species from the area, including buckthorn, garlic mustard, phragmites, spotted knapweed, and purple loosestrife, to name a few. His work in this area is part of the overall management of the Scuppernong River Habitat Area and in 2013, he and approximately 11 volunteers contributed about 1,400 hours of labor. Paul and his fellow volunteers are no stranger to hard work; it’s a real labor of ecological love, plus a few shovels. According to one of Mr. Mozina’s nominators, he works “year-round, virtually non-stop, including the unforgiving winter months” and is an inspiration to both his peer volunteers and those who learn from his work.