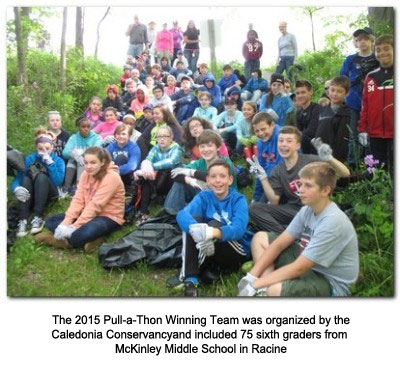 Our Garlic Mustard Pull-A-Thon is an annual event, where we encourage people throughout southeastern Wisconsin to protect the woodlands of their neighborhoods by pulling this invasive plant. The pull-a-thon is a competition, a fundraiser, and a way for people to join together and have a positive impact on their environment.

This spring, 10 teams formed by 361 volunteers helped to raise funds and awareness while controlling 13,500 pounds of garlic mustard and dame's rocket in our natural areas. Volunteers recruited friends, family and colleagues to sponsor their pulling efforts. What a fun way to make a real difference in the protection of the wild areas that we love!

The tax-deductable pledge contributions were shared between SEWISC and event partners and the funds will be used for invasive species education, prevention and control in southeastern Wisconsin.  Honorable mention goes to the Eagle Nature Trail Team, which, for the past two years, has been the winning team in raising donations.  Thank you to all the 2015 teams and to their generous sponsors. 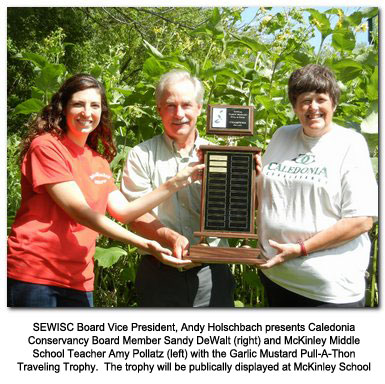 The Garlic Mustard Pull-A-Thon Trophy is a team-to-team award for dedicated efforts to control invasive species in southeastern Wisconsin. Each year, the team with the most bags of pulled garlic mustard and/or dame’s rocket wins the trophy which travels throughout our eight-county region.

Join the fun.  It’s never too soon to begin recruiting 2016 Pull-A-Thon Teams! Will the impressive trophy be passed to another team in 2016, or will the Caledonia Conservancy win the competition and keep the trophy for another year?

Got garlic mustard?  If you would like to volunteer as a Team Leader in 2016 and add your worksite location to our event, please email us at: .