A New Invader to the SEWISC Region 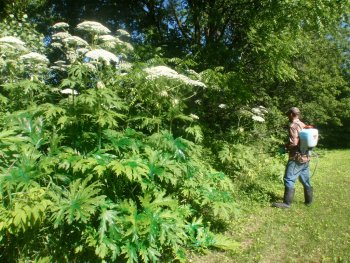 (Heracleum mantegazzianum) was positively identified for the first time in southeastern Wisconsin during the summer months.  Early detection of this Wisconsin Prohibited Species has resulted in rapid control with the vital help of the Wisconsin Department of Natural Resources (WDNR) and local homeowners.  SEWISC immediately contracted with Applied Ecological Services who treated hundreds of plants with herbicide and followed-up with the removal of seed heads within a south Sheboygan neighborhood and along a nearby railroad right-of-way. SEWISC continues to work with the homeowners, railroad officials, and the WDNR to monitor the two populations.  This hogweed monitoring and control work will continue over the next few years to ensure eradication of viable seed.

Giant hogweed was first recorded in Wisconsin in 2004 with other confirmed reports to-date from Iron, Waupaca, and Manitowoc Counties. A single plant produces thousands of seeds, which can be dispersed by flowing water or animals. Giant hogweed commonly invades new territories as a result of plantings by un-informed humans who are impressed with its impressive size and novelty.

An herbaceous biennial or monocarpic perennial that grows as a lowing-laying bushy rosette for the first year, hogweed plants usually bolt during the second year and grow 8 to 20 feet tall. The hollow, ridged stems are covered in coarse white hairs and reddish-purple mottling. Leaves are compound, 1 to 5 foot wide, palmate, deeply lobed and pointed. The undersides of leaves are covered in coarse white hairs. Flowers are large flat-top umbels, up to 20 inches wide across, with white, 5-petal flowers that bloom from May-July. The plant dies after seed dispersal. 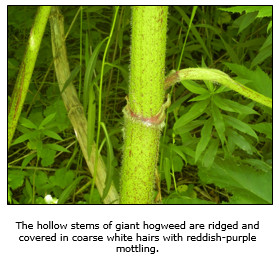 Giant hogweed invades roadsides, vacant lots and woodland edges. Due to fast growth rates, populations can displace native vegetation. The species prefers moist shady areas, particularly along stream banks, where it can lead to soil erosion and easily disperse seeds downstream.  Warning: Sap from leaves and stems can cause a phytophotodermatitic reaction on skin, when exposed to sunlight, resulting in severe burns and blisters.

Don’t confuse our native American cow parsnip (Heracleum lanatum) and other similar plants with giant hogweed. Use on-line resources, printed materials and great educational videos to differentiate between the species, carefully examine the plant and if you are still unsure, send photos to the WDNR.  If you believe you have giant hogweed growing in your area, contact WDNR.