Congratulations to our southeast Wisconsin recipient 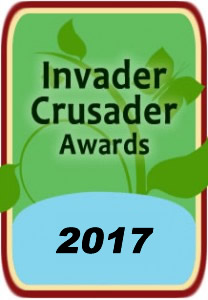 We are proud to report that Daniel Pawlak was chosen to receive a 2017 award for his dedicated work in southeastern Wisconsin!  The Invader Crusader Awards Ceremony was held on June 8th at MacKenzie Environmental Center in Poynette, WI.

Mr.Pawlak has served as a parent volunteer at Eagleville Elementary Charter School for the past four years. When he began volunteering, Dan started an afterschool science club which engages about 30-40 students each year. From 2014-2015, he focused on invasive species, educating students in grades 1-6 about the impacts of invasives on the local ecosystem, focusing on Jericho Creek, a nearby tributary of the Mukwonago River.

With Dan’s mentorship, students have learned to identify, monitor, and prevent the spread of invasive species. One of his projects involved the invasive Asiatic clam; with his help, students searched the creek for native and invasive clams. No Asiatic clams have yet been found, but Dan plans to continue this in the future to monitor the area. Through Dan’s mentorship, countless students have become more aware of invasive species in their area and have gained a greater appreciation for the natural world around them. Dan’s hard work has paved the way for the next generation of environmental stewards.