Glyceria maxima (reed manna grass) is a perennial rhizomatous grass.  It is known to invade wetlands, including swamps, ditches, wet pastures, and lakes, ponds, slow-moving rivers and creeks where it forms low diversity stands that are capable of crowding out native vegetation and animals. 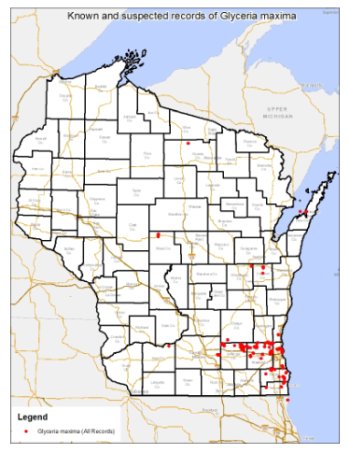 During the 2017 field season, SEWISC is working to identify, map and record over 200 reported G. maxima populations on public and private lands in our region. This survey information is shared with our project partner, the Wisconsin DNR, who will work with landowners to manage the populations. An experiment to control this species is currently underway in Dane county and initial observations look promising for complete control.