Congratulations to our southeast Wisconsin recipients

In 2005 Governor James Doyle demonstrated a firm commitment to address the issue of invasive species in Wisconsin by creating the Wisconsin Council on Invasive Species and by declaring June of that year the first annual Invasive Species Awareness Month. That tradition has continued in an effort to raise awareness about non-native invasive plants and animals and to initiate action for minimizing their negative impacts. This annual event is a great opportunity for the Council to recognize the efforts of outstanding individuals and organizations that have demonstrated exemplary work in combating the spread of invasive species. The Invader Crusader Awards Ceremony was held on June 6 at Olbrich Botanical Gardens in Madison.

Ruth Marshall was chosen to receive a 2018 award for her dedicated work in southeastern Wisconsin. Ruth has been an active member of SEWISC for the past ten years, reaching far beyond her role as Weed Commissioner for the Village of Nashotah to educate the public regarding the negative impacts of invasive species. Each year, Ruth contacts SEWISC to obtain a new stock of invasive species educational flyers and to purchase additional field ID guides, which she distributes and uses during various public events. Ruth has also been a very active volunteer with the Southeast Wisconsin Master Gardeners program since 2004. 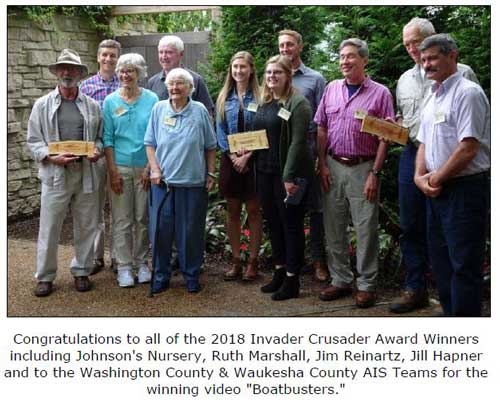 Working together as a team, Jill Hapner and Jim Reinartz have made significant contributions to the control of invasive species over several decades. As co-founders of SEWISC, they have been instramental in our efforts to develop and implement educational programming and on-the-ground control and management of invasive plants and animals threatening our region.

Johnson’s Nursery, Inc. in Menomonee Falls has been growing and selling landscape plants since 1959. For more than 25 years they have made a strong effort to grow and promote more native species, and to eliminate species and cultivars known to be invasive. Through their propagation program, they have evaluated invasiveness tendencies along with other traits, and rejected those plants that were overly aggressive. They were leaders amongst the Wisconsin Nursery and Landscape Association, encouraging other companies to stop growing invasives and to support NR 40. Over the past five years, JNI has partnered with SEWISC to host the Where Ecology Meets Economy Forum series. This event attracts landscape professionals, gardeners, ecologists and agency staff to hear about and discuss issues relating to invasive plants and related topics.