Viburnum leaf beetle (VLB), Pyrrhalta viburni, is a European native that has been in Canada for over 70 years, and on the east coast of the US since at least 1996.  VLB is now in scattered locations throughout the northeast.  In 2014, VLB was found in northern Milwaukee County, and is currently eating Viburnums there and in Ozaukee County at least as far north as Cedarburg.  It is expected to spread, and while it will eat any Viburnum species, it strongly prefers Arrowwood Viburnum (Viburnum dentatum) and both the European and American Highbush Cranberries. 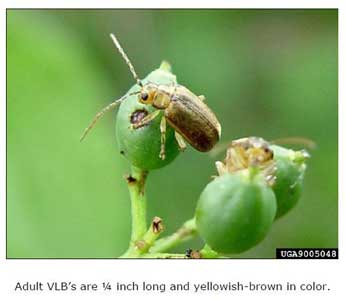 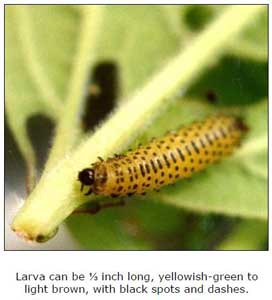 VLB larvae are often found in small groups and their feeding damage can look like that caused by Japanese beetles.  VLB adults begin to feed in late June and early July and chew oblong holes in leaves. When VLB are abundant, they can defoliate viburnum shrubs, and eventually kill the weakened plants. 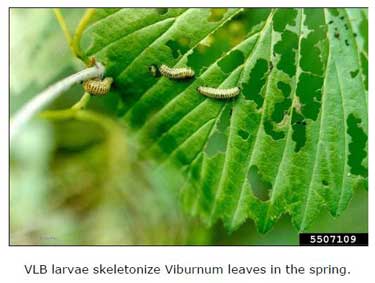 After just one generation in a season, VLB’s overwinter as eggs that the adult females have laid in Viburnum twigs. A single female VLB can lay up to 500 eggs, which take about 8 weeks to grow from egg to adult the following season.  The larvae go through three instar stages after they appear in mid-May, and then pupate in the soil in early- to mid-June.  The adults lay eggs all summer and into October after they emerge.

While several chemical control options are available, some cultural control of VLB can reduce VLB damage.  Twigs with VLB eggs can be removed and destroyed in the winter, and several natural insect predators of VLB can be encouraged in your area.