Tyler Ohberg and Molly Besaw worked with Jerry Ziegler, who manages six nature preserves for The Nature Conservancy (TNC) in Waukesha and Walworth counties. Tyler completed an inventory and GPS mapping of a 66-acre timber stand on a TNC easement. His mapping revealed a surprising number of conifer trees (8,930!); many more than TNC staff had originally estimated. Tyler divided the site into 14 tracks which will be invaluable in planning the restoration of the property. Molly inventoried a white and red pine timber stand and also catalogued and mapped nearly two dozen springs on a new TNC property. Her work will give the Conservancy critical direction as it moves forward in planning the restoration of the water flow on the property.

Schlitz Audubon Land Manager, Marc White mentored students Ian Smith and Mark Wojta who recorded the location and size of invasive species clusters within the Audubon’s reptile and amphibian conservation area. They worked as a team to hand-pull, bag and remove invasive plants and produced a map by entering the data into an ArcGIS database. Ian and Mark used their geodatabase to guide volunteer groups to larger invasive populations and document control efforts. 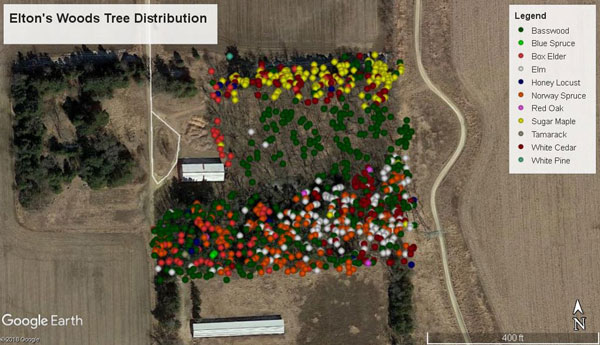 Jason Nickels of the Mequon Nature Preserve received the help of Anna Biegaj and Coleton Nordquist who inventoried trees in Mary's Grove and Elton's Woods (see map above). They recorded tree species and diameter and also collected GPS points of each tree to create a map representing species distribution, abundance and size class. This data will help guide future restoration of these areas. Anna and Coleton also helped to map the memorial trees and benches that are located throughout the Preserve.

We would like to thank Jerry, Marc, Jason, Ryan and Matt for volunteering to mentor these students and for offering educational opportunities during the summer through which the students mastered new skills while honing talents gained through their University of Wisconsin-Milwaukee coursework.