Schlitz Audubon Land Manager, Drew Shuster mentored two students: Benjamin Catura and Nate Wojcicki  who recorded the location and size of invasive species clusters within the Audubon’s reptile and amphibian conservation area. They worked as a team to hand-pull, bag and remove invasive plants and produced a map by entering the data into an ArcGIS database. The students used their geodatabase to guide volunteer groups to larger invasive populations and document control efforts. 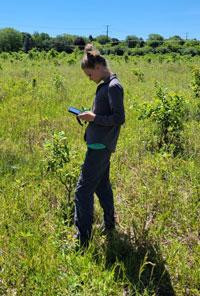 Nick Gall of the Mequon Nature Preserve had the pleasure of hosting two students, Dagmar Boll (pictured left) and Adam Krainik. During their three-week session, the students used Arc Field Maps to document over fifteen invasive species such as teasel and wild parsnip, and record tree location and species on the new 66-acre, Preserve parcel. The students also helped measure stream bank depth, top width and bottom width of the Trinity Creek channel which will be used to measure stream bank erosion within the channelized stream. These data and maps will help guide future restoration projects on the stream and surrounding upland and forest communities 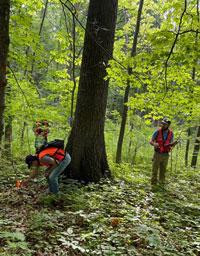 Nathan Freeman, Juan Olmos-Garcia, Alex Thiel collecting geobotanical data at Riveredge Nature Center Chad took as many as eighty photos at each site! He also walked and used the tracking feature to delineate more than ten sections of trail that were also missing in the system.

Matt Smith, Land Manager at Riveredge Nature Center, is grateful to students Nathan Freeman, Juan Olmos-Garcia, and Alex Thiel  for their tireless work inventorying and removing outlier populations of invasive mustard species (such as garlic mustard and dame's rocket) across 137 acres of the Center’s property. This year's student team was able to finish surveying the project area in record time due to the annual student field effort and dedicated work ethic. In fact, they finished this project and still had time to walk each shoreline of the Center’s stretch of the Milwaukee River and its islands to inventory another invasive species, yellow iris.

We would like to thank Drew, Nick, Ryan, and Matt for volunteering to mentor these students and for offering educational opportunities during the summer through which the students mastered new skills while honing talents gained through their University of Wisconsin-Milwaukee coursework.