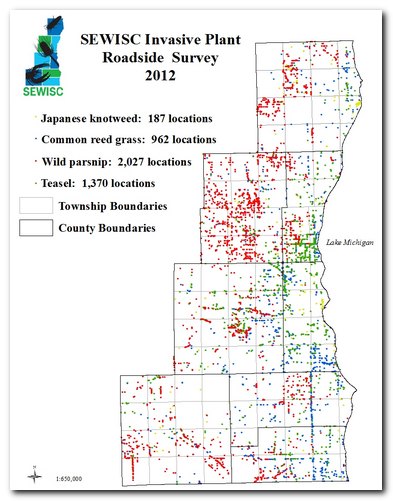 Wild parsnip was reported in 2,027 locations, and more than a third of those populations were reported in Washington County. Thirty-four additional Japanese knotweed populations were spotted by the volunteers, while giant reed grass and teasel population sightings increased by 151 and 276 respectively. Surveyors also noted that many populations which were mapped in 2011 are now being managed by landowners and land managers.

Thanks to the 181 volunteers who have donated more than 2,500 hours and drove, hiked and biked nearly 26,000 miles through their neighborhoods over the past two years to identify and map these problematic species. We also want to thank our County GIS Departments and the Southeastern Wisconsin Regional Planning Commission who eagerly supplied the volunteers with township maps.

We are currently recruiting teams to help collect some missing data in the Walworth County townships of: Sharon, Lafayette, East Troy, Richmond and Bloomfield; and in the Sheboygan County townships of: Russell, Greenbush, and Lyndon. If you would like to volunteer to help map the missing data this coming summer, please contact us at: . You will also have opportunities to help control these populations so stay tuned!