Environmental DNA, or eDNA, surveillance is becoming a useful tool for detecting rare species in aquatic environments. Many fish species, like bighead and silver carp, may easily avoid detection through traditional sampling methods yet leave traces of eDNA that is detectable using techniques commonly used in microbiology. While it would be nice if the presence of the target eDNA indicated positive presence of the live target organism, it isn’t that simple because the eDNA could have come from other sources such as the side of a boat or a net that was used to fish for Asian carp. It can also come from the sewer systems or from bird feces. Given this information, a single positive hit doesn’t necessarily indicate the presence of fish. eDNA surveillance uses multiple repeated detections over time to suggest the presence of live fish. Repeated positives in the same location over time can be considered strong evidence for the presence of live fish. 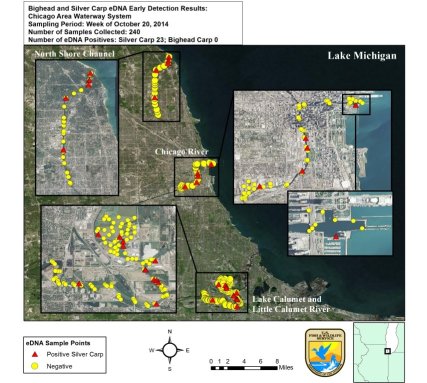 The US Fish and Wildlife Service (USFWS) has been using eDNA surveillance methods to monitor the Great Lakes for evidence of silver and bighead carp for the past few years, regularly monitoring the Chicago Area Waterway System (CAWS) in addition to other sites around the Great Lakes Basin. The most recently published results indicated that 23 samples tested positive for silver carp eDNA. These results raised some eyebrows, but this isn’t the first time samples have tested positive above the barrier. For example there were 18 positives in June of 2013, 7 in June of 2014, and 3 in November 2013. Yet according to the Asian Carp Regional Coordinating Committee, only one carp has been captured above the barrier, even with intensive sampling efforts.

The number of positive samples in the CAWS combined with the lack of bighead and silver carp captured using traditional sampling methods can make things difficult for resource managers. On one hand, the most parsimonious explanation for positive samples is the presence of live fish and repeated detection of silver carp eDNA can also indicate this. On the other hand, the proximity of the CAWS to established populations of silver and bighead carp below the barrier make the alternative eDNA sources more likely (e.g. birds, boats, and nets). At the very least, eDNA sampling is a useful tool to narrow down the great number of places we could be looking for rare organisms (invasive or endangered). Continuing to work with eDNA surveillance and tools will help us to learn more and eventually reduce the ambiguity in results like these. The USFWS has concluded the recent eDNA test results are “probably not” from a live fish. However, the proximity of the eDNA sample (about a city block from the lake) is another reminder of the need for more short- and long-term carp controls to protect our Great Lakes.