No welcome-wagon for this new neighbor:

Here’s a relative newcomer to our area. It has been found in about 10 Wisconsin counties and is believed to be much more widespread in the state. You may have already spotted a population and confused it for another weedy species, such as wild chervil, caraway, poison hemlock, parsley or sweet cicely. Japanese hedge parsley differs from those species by its smaller leaves and more open-branched structure.  It can be controlled by pulling or mowing just before flowering. 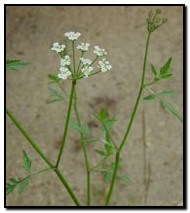 Glyphosate or triclopyr can knock it back when used early in the spring or upon re-sprouting after cutting.  Your first sighting of this species may be along a trail, where you might see a line of individual plants.  That’s because the tiny fruit on this invasive rascal has a Velcro-like hair that hooks onto humans or animals and then drops off elsewhere after hitching a ride.  It’s a problem because it will spread rapidly and crowd out native species in the understory of woodlands and savannas.